Hull City’s replay win sets Sunderland a stiff but not insurmountable task in the bid for at least one more Wembley trip after Sunday’s. Mick Goulding asks the SAFC powers that be to give some careful thought to the ticketing process should further FA Cup progress be made …

So….here we are again on our once-per-generation cup final trip to Wembley – as usual the underdog, and our heads full of that “hope for the best but expect the worst” ambivalence that haunts the life of the Sunderland fan.

I couldn’t get a ticket for ’73, but have been to the defeats in ’85, ’90, ’92 and ’98 (only two of them cup finals), so I already know that looking forward to the event itself is more sensible than worrying about the result. And having recently entered my 60s, it occurs to me that (Sunderland being what they are) this could be my last cup final trip, so enjoying the weekend is what it’s all about.

I’m going with my son, who is just short of 17, so this is his first cup final; and he needs to enjoy the event for the exact same reason – because you never know when/if the next one might come around (and Sunderland being what they are, he may be taking his teenage son to the next one)…

In his short life he has already lived through three promotions and two relegations, with his first season as a season ticket (ST) holder being the infamous 15-pointer. He’s already paid his dues and deserves some glory.

Older fans will no doubt remember the highly stressful and dysfunctional processes for getting tickets in ’73, ’85 and ’92. Roker Park was a place with only a few thousand seats and the vast majority of fans had no ST (because they didn’t exist in standing areas) and turned up for games with no tickets and no means of demonstrating loyalty which could be measured.

Despite going to all the games, I was always a “Turnstile B” person. I missed out completely in ’73, but managed to blag my way to ’85 and ’92 through contacts with friends of friends and blokes met in the pub etc. 1990 was a play-off game and tickets were easy to come by, and by ’98 I was a season ticket holder at the new stadium – but just about everybody got a ticket anyway.

So this year, with our STs and a few away trips under our belts, our loyalty credentials are comfortably intact, and for the first time in my life I was able to be totally relaxed about getting a cup final ticket from SAFC as of right.

“Loyalty” is the watchword and the key; and in this 21st Century technological world, it’s even become measurable. But is it being measured correctly? Is it possible for the club to come up with a foolproof method which every fan will accept?

Some of the statements made by the club about the sale of tickets for this final have surprised me. First they announced a Phase 1 and Phase 2 for sales to ST holders and that a further announcement would be made for any Phase 3. But by the start of Phase 1, they were already announcing that a Phase 3 would be “unlikely”.

Surely they should have known, in advance, exactly what the numbers were? “Total Allocation” minus “Number of ST Holders” minus “Internal SAFC Consumption” minus “Corporate Sponsors” = “Remainder”. The only variable should have been “Corporate Sponsors”, and what the club have clearly done is to adjust this number until the “Remainder” became Zero. A quick, back-of-the-envelope calculation should have shown that a general sale in Phase 3 would be neither “likely” nor “unlikely” but simply a matter of fact. But a lack of clarity left many fans in the dark and unhappy. 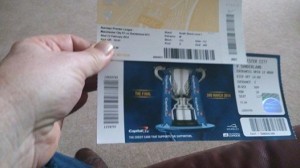 The club’s subsequent announcement that “demand had been unprecedented” just made me laugh. It would only be unprecedented for those at the club too new, or too young, to have been there in 1992. But it shouldn’t have come as any surprise to anybody that a club capable of filling a 48k stadium (when things are going well) would have a demand (whether legitimate or not) for cup final tickets which was bigger than the actual allocation – reported as 31k.

And while the club was using this “unprecedented demand” to suggest that they were under a lot of pressure, let’s remember that all they really did was to tell ST holders they could all have one – and then spend two weeks selling them. If the number of ST holders is the reported figure, circa 26,000, that’s the kind of number which would be sold out in about an hour for a major music event – with nobody queuing, nobody being ripped off, and no computers crashing.

The bizarre thing (although maybe not, this being Sunderland) is that, despite being in big relegation trouble, we are only one winnable game away from another trip to Wembley in the FA Cup semi-final. If the incredible happened and we got to the final, there would be even fewer tickets for that (than there is for the League Cup Final) and the club’s process for discerning priority would be really tested! When even some ST holders won’t be guaranteed a ticket, then we’ll see some real stress – so the club needs to think ahead and plan for this now. I mean….one day we might even be a successful club, where this kind of thing might be commonplace!

I’ve said that loyalty can be measured now, and that’s true because all of our purchasing transactions made using our Customer Numbers are held on the club database. Clearly the up-front purchase of STs demonstrates a loyal commitment to the club, so ST status has to be the foundation on which loyalty is based.

But the only figure they’re currently using to measure loyalty beyond that is the purchase of tickets for away games. Now, nobody would question the loyalty of ST holders who go to away games. But there are lots of perfectly good reasons why many ST holders don’t or can’t do that. And these latter ST holders may go to every home cup tie, whereas some of the away-game followers might not. Is it right that going to an away game shows “more loyalty” than attending a home cup tie?

I know there’s no easy answer to this, and fans will all have their own opinions and ideas. But is it time for the club to re-assess and make a clear and definitive statement on how it proposes to sort this out in future?