Pete Sixsmith’s phone and mine have compatibility issues. He sends goal texts and his Sixer’s Sevens match verdicts and nothing appears. I try to make sure he’s not stranded on on the Pennines by road closures and howling gales on the futile trip towards Man City and he sees nothing on his phone. Then a seven-worder arrived all the same: ‘No football but lots of Hydes bitter’. Since it’s a Manchester-brewed ale, we can safely assume the Durham branch coach made it before the match was postponed and that its occupants then celebrated avoidance of the defeat every pundit confidently predicted.

And so to Southampton in the FA Cup 5th round. Nick Gregory* runs Southampton away travel and transports Saints fans on their journeys around the country (though the long hauls to Wearside or Tyneside – likened by Nick to climbing Everest – are offset by several annual sprints to London0. He had to fit these answers into a hectic week that involved the game at Hull, which explains the terse answers. It’s more of a quickfire Q+A than the customary long read …

Salut! Sunderland: Mauricio Pochettino is still producing the goods despite recent turmoil at the club . How important is it that he stays in the long term?

Nick Gregory: It’s very important that he stays as the players like playing for him and our younger players are developing well under his management. I think the younger players have done very well which has helped a lot some of our big signings have disappointed but others stepped up.

That turmoil. Nicolas Cortese sacks a popular manager, is proved right by the success of his replacement but takes away your famous red and white stripes (almost as famous as ours) and then stomps off. What is going on?

Our chairman was very ambitions that was good for the club but he also likes to control everything and do things his way.

How did you feel about going two up at our place, appearing in complete control and then not only losing the least but ending up as close as we were to losing the game?

Disappointed but Sunderland played a lot better in the second half.

Any thoughts on players and staff linked to both clubs: McMenemy (not a popular man among our supporters), Kenwyne, Kevin Phillips, Kelvin and any others I have overlooked …

Not really Kevin Phillips a good player for must clubs he has played for.

Does the FA Cup mean much to you? You sent a weakened side to play us in the league cup but is the possibility of a quarter final place this time around an incentive?

It is an incentive to me but I am not sure the club are focused or wanting it. I think they are thinking bigger, ie a three-year plan. That plan is to reach the Champions League. Unfortunately we probably won’t make it this year but I am hoping it will be sooner rather than later

Are you old enough to have seen Keegan, Channon and the other stars of Southampton’s past? How do they compare with the present squad? And what about the ones you’ve groomed – notably Theo, Alex Oxlade-Chamberlain, Bale? Glad to have seen them or resentful that they didn’t stick around?

I am not old enough to remember Channon and Keegan. If we had players like Bale, Walcott and Alex now, we would have been able to keep as we no longer need to sell. Buyt I am pleased they are doing well.

My high was getting into Europe and going to Bucharest to watch us in 2003. The low was being bottom of league – which was not so long ago.

What annoys you most about modern football?

The price of watching it!

I’ll be at a Sunderland-Southampton game for the 4th time in nine months, pop in our local for a few and then off to climb Everest for the last time this season. Two-nil to us – a Jay Rod brace 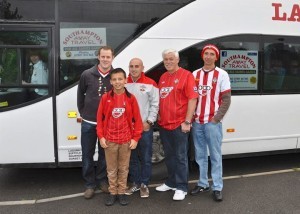 * Nick Gregory on himself: My first home game was when I was eight years old and didn’t want to go. I went and loved it even though it finished 0-0. My first away game was in 1984, the FA Cup semi final at Highbury against Everton. We lost to an Adrian Heath 112th minute goal. I been going ever since then, my wife and I started taking Saints fans to away games in 2011 (southamptonawaytravel), and we have built the business up and on Boxing Day took 174 people to Cardiff. We offer free food, drink WiFi and entertainment onboard and only charge £29.95 to Sunderland www.southamptonawaytravel.co.uk @saintstravel

1 thought on “‘Sunderland v Southampton Who are You?: 1,000km round trips ‘like scaling Everest’”