Phillip Nifield seems a decent character. He and Monsieur Salut pursued the same, now dying trade; he found life after newspapers so must remember to send a begging letter. But he’s always been a Cardiff fan, with lots of memories as you’ll soon see. Surely he’d be grudgingly happy for us to win. Surely we will anyway. No chance. Phillip, a board member of the Cardiff City Supporters’ Trust, expects the result that will please no one – a draw …

Salut! Sunderland: Sunderland have taken four points from top teams when none seemed more likely, making SAFC vs Cardiff as important a game as the club has played in years. Both clubs in deep trouble but still fighting and hoping. Are you feeling the stress?

Phillip Nifield: Some amazing results from Sunderland – can they do it when they will be favourites and at home? Sunday will tell. We still have hope but Sunday’s match is absolutely crucial for both sides. If there is a winner they have a decent chance of staying up while the loser will probably go down. It will be very tense.

Promoted teams would generally settle for fourth bottom (unless, taking the Ligue 1 example, they’re Monaco and have bags of money and impatient ambition) but did you expect the struggle you’ve had? And did you expect SAFC to have such a bad season?

It was always going to be a struggle for us in the first season in the Premier League but all the off-the-field nonsense has definitely impacted on the club and its supporters. The first season in the top division for 50 plus years should have been a joyful occasion – it hasn’t been because of mess surrounding the sacking of Malky Mackay and regular unnecessary and inflammatory comments in the media by Vincent Tan. That is not to say that some of the player purchases by Malky weren’t questionable and poor value for money. Personally, I’ll be glad when the season is over and we can start again whether it is in the Premier League or Championship.
I expected Sunderland to be around mid-table but they did appoint Paulo Di Canio so anything was possible. I thought Gus Poyet had turned things around, then there was a really bad run followed by two fantastic results. Shows what an unpredictable game football is.

Unless already dealt with, does Vincent Tan deserve the heavy criticism he’s received for his apparent contempt for club tradition – not that this would have any impact of results – and his squabbling with, and finally sacking of, Malky Mackay? Or are you just grateful he’s not Peter Ridsdale?

Definitely. No one can deny that Vincent Tan’s financial support has been crucial in stabilising the financial position of the club and helping us win promotion to the Premier League. But the vast majority of Bluebirds fans – myself included – will never forgive Vincent Tan for trampling our club’s history and tradition. I always believed that people from Malaysia were particularly strong on tradition, sadly not our owner. How would Sunderland fans feel if they were told their playing strip was changing to blue without any consultation? Mr Tan has also not kept his promise to convert debt into equity which could leave us in the future in the same position as under Sam Hammam, except with even more debt.

Mr Tan has totally failed to communicate with supporters and apart from a brief meeting has not met fans. He should be a hero given his financial support for the club but his contempt for supporters and traditions has made him anything but. The club has been a complete shambles off the field this season and he must take most of the responsibility for that.

In an ideal world, I would like Cardiff to have the set up similar to that at Swansea where there are local owners, who are passionate about their club and there is a Trust member on the board. We do need an elected supporter representative on the board. The voice of the fan must be heard.

Ole Gunnar Solskjær: one to lead you to better things?

The jury is still out on Ole. He came into a very difficult situation with no managerial experience in the English leagues and has chopped and changed the team line-up too much for some of us. Until the last couple of games we have not had a settled line-up. If we were to go down, I believe the club should give Ole the chance to get us up again from the Championship.

How much do you miss Ninian Park?

I miss the atmosphere of the old ground – it was very intimidating for visiting teams but it was well passed its use-by date. The facilities in the new ground are so much better, particularly for women and young supporters. You have to move on and the new stadium is a step change, although I have so many wonderful memories of Ninian Park.

You may not be old enough to have seen them play but do you have handed-down memories of the Charles brothers, Allchurch, Toshack and other great players associated with the club even if they played much of their careers elsewhere?

I’ve watched all those players in a blue shirt. From the names you mention John Charles and Ivor Allchurch stand out, even though they were at the end of their careers, they still oozed class. I remember no supporter could believe a great like John Charles had signed for us. He could play centre half as well as centre forward. One of the all-time greats.

My best memories before the recent promotion were in the 1960s and early 1970s when we had a very decent Division 2 team and did well in the European Cup Winners’ Cup, reaching the semi-final on one occasion.

If the worst comes to the worst, which of our clubs is better placed to bounce straight back?

Sunderland have bounced back quickly in the past so will certainly be the favourites to do so again. Cardiff will also have a good chance if the parachute money is made available for the team and doesn’t all end up in Vincent Tan’s pocket.

What have been your highs and lows as a Cardiff supporter?

The highs have been the promotion to the top division, appearing in an FA Cup Final (which we should have won) and beating Real Madrid at home in 1971 in the Cup Winners’ Cup. The lows – and there have been plenty – have been when we were in the bottom division and also the seemingly constant financial troubles over the decades.

And the greatest players you have seen in your colours (or Tan’s colours!)?

Apart from John Charles and Ivor Allchurch my favourite players are Ian Gibson, who also played for Middlesbrough, Dave Bennett, Willie Anderson and Brian Harris, the ex-Everton defender who came to us after winning the FA Cup with the Merseysiders.

In more recent times my favourite players would be Carl Dale, Andy Legg, Jason Perry, Graham Kavanagh, who was really committed to the club as skipper and hugely popular with supporters and from the current squad, Peter Whittingham, a great servant with a beautiful left foot. Peter’s also very unassuming.

Who should have been allowed nowhere near the shirt?

I wouldn’t want to embarrass them but we have plenty of duff players over the years.

Any thoughts on Sunderland – the club, the fans, the city, the region?

My only visit to Sunderland was while a student in Darlington when I went to Roker Park to watch Cardiff City play. My wife and I spent a holiday in the North East, in Northumberland. The fans are a passionate bunch and deserve better than what has been served up in recent years. Paulo Di Canio was a disastrous appointment in my opinion.

What will be the season’s top four, in order, in the Premier and who is going down?

Liverpool, Manchester City, Chelsea and Arsenal. On the relegation front we will know more after the weekend but Norwich, whose fixtures make it look very difficult for them to survive, plus any two from Sunderland, Fulham and Cardiff.

Does anything about modern football truly inspire you?

The stadiums are much improved, the exciting and competitive football in the Premier League and, indeed, the Championship. There should be safe standing areas allowed in the top divisions.

The way fans are treated – ticket pricing by some clubs which sadly price out many traditional working class supporters, the lack of engagement between club owners and fans and kick off times with no thought of fans. Some of the wages paid to players are frankly ridiculous – football at the very top has lost touch with its traditional supporters.

While on the playing front the diving, feigning injury and holding in the penalty area without it ever been penalised. It’s time referees started awarding penalties – shirt pulling would soon stop.

Tell us a little about the CCFC Trust and your role in it.

The Trust acts as a voice for fans, taking up issues of concern with the club. We also organised the campaign to erect a statue for Fred Keenor (captain of our 1927 FA Cup winning team) at the stadium and do lots of work in the community with ethnic minority and disadvantaged people and have excellent dialogue with local politicians, some of whom are members of the Trust. We have also organised several player reunion events which have proved very popular. We’re a democratic organisation and everyone on the board has to seek election every two years.
I’m the Trust’s Press Officer responsible for communications including dealing with the media, drafting Press releases, running our website, Twitter and Facebook feeds and we also produce a magazine once or twice a year for members. I’m interviewed regularly by TV and radio on all issues Cardiff City.

I’m excited because I’m going to see three games. My son lives in Brazil so I’ll be staying with him and his wife – I’ll be watching Columbia v Greece, Belgium v Algeria and Argentina v Iran in the group games. The atmosphere will be amazing, I’m assured. I haven’t seen my son for 18 months so looking forward to spending some time with him.

No, I won’t be at the game. I will be watching on Sky. I’ll go for a 1-1 draw (which probably neither team will want) but hoping that Cardiff can sneak a win as they did at Southampton. 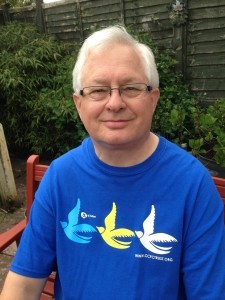 I spent 38 years as a journalist on the local evening newspaper, the South Wales Echo, finishing as Political & Business Editor. I now work as a press officer for two members of the Welsh Assembly. I’ve been supporting Cardiff City for more than 50 years – since my late father took me to Ninian Park.

2 thoughts on “Sunderland vs Cardiff ‘Who are You?’: on Tan, Malky, Ole and relegation”

Next Post
Awards surely premature, but Mannone and Borini deserve their acclaim