Comments were inadvertently ‘disabled’ when this first appeared. The WordPress system seems to do it all by itself. Apologies: you may now now respond to the item …

Craig Gardner leaves Sunderland for West Brom with head held high, his reputation among supporters second-to-none for the right reasons.

For lots of fans, the fondest memories of his three years at the Stadium of Light will be of his rapport with them, lifeblood of the club.

When Sunderland beat Newcastle 3-0 at St James’ Park – sorry, on one of the occasions Sunderland beat NUFC 3-0 at SJP – Craig, suspended for the game, was captured on YouTube taking the Metro home and leading jubilant supporters in a Paolo Di Canio chant.

Priceless in itself, it was not the only time he demonstrated empathy with the support, something of a rarity in the modern game. Perhaps as typical of the player was that he returned to the team for the next game, at home to Stoke, and was promptly sent off.

But fans broadly forgave him the misplaced passes and the occasional, costly lapses in discipline. He played wholeheartedly – and, from midfield, scored important goals.

As Jake, Salut! Sunderland’s ace illustrator and responsible for the three Gardner images you see here, put it:

I liked him a lot, not a great footballer but a trier who scored the occasional spectacular goal, and boy could he take a penalty! 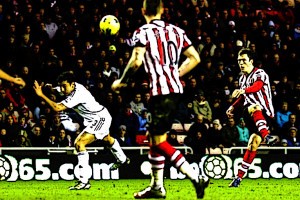 OK, those penalties did not include the one he missed at Old Trafford. Generally, you knew if he was there to take one, we’d score. As safc.com’s report of his Bosman transfer to WBA shows, the goals came from places other than a spot 12 yards out in the penalty box: “… made over 70 appearances for Sunderland and notched 14 goals during his time with the club.” Jake’s image of the cup winner vs Southampton is a cracking example.

Salut! wishes the lad well. He is obviously happy to return to his native part of the country, having also played for Villa and Birmingham.

“It’s obviously a pleasure,” he told the local Express and Star newspaper. “It’s a great club. I’ve got a lot of friends here and I’m just buzzing that I’m back at home in the Midlands where I enjoy my football the most and feel I play my best football.

“I was linked with West Brom previously and I was just praying it happened this time. Now eventually it has happened so I’m over the moon.”

Good luck, Craig, thanks for your efforts in the cause of SAFC and please don’t do too well against us next season. 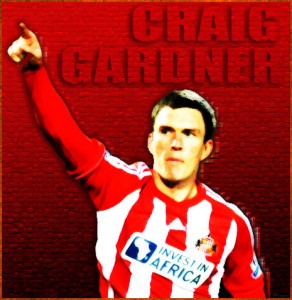 3 thoughts on “‘Boy, could he take penalties’: good luck to Craig Gardner at WBA”