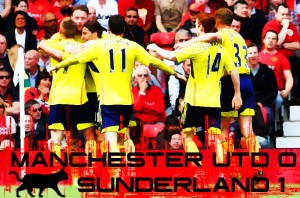 Malcolm Dawson writes…the manager has every right to be pleased with the form of his team just now. A couple of minutes away from a win at Manchester City and today victory against the red half of that city. Sandwiched in between three points at Stamford Bridge and a rare home victory against the ultimately doomed Cardiff City has put his side in a position where Premiership survival is all (but not yet mathematically) assured. Gus knows this and vows that his boys will keep working until the season’s end as he explains in his post match e-mail to M Salut.

It was a very strange game; in the beginning it was very flat and had a slow pace, which gave us the chance to pass the ball and get forward.

Seb [Larsson] has been looking for that goal for a few weeks, he can finish very well, he’s got a special right foot and what a way to get back on the scoresheet, with the winning goal at Old Trafford.

We defended magnificently after taking the lead. Every player put their body on the line and we had more chances after that and passed the ball around very well.

The subs were outstanding, we’ve started with the same XI for the last few games but I must say the subs have done brilliantly in those games when they’ve come on. They’ve brought something special to help the team each time.

We knew that we were capable of getting a result, and to go and get a first league win at Old Trafford in over 40 years is even better.

We’ve got the points when we’ve needed them most and if results go our way tomorrow we’re likely to remain in the Barclays Premier League; this is an incredible achievement when you consider our position a couple of weeks ago.

We now know that one more win, in front of our fans at a packed out Stadium of Light will be enough for us and then we can celebrate together.

I’m immensely proud of the team; now I just want us to finish the job and get over the line. That would be a very special moment for me, the players, the fans and the club, then we can sit down and relax, but until then we won’t stop.

16 thoughts on “Pure Poyetry: breaking the Old Trafford hoodoo, but celebrations on hold”

Next Post
Sixer’s Sevens: Manchester United 0 Sunderland 1. Things have only got better