First things first. The World Cup poll – not to be taken too seriously – currently shows Uruguay ahead of the USA in terms of preference.

Our marks-out-of-ten columnist, young Keir Bradwell, has registered a protest: how can we have people voting for another team in England’s group? The answer is that you can want England to succeed but have, in reserve, affection for Uruguay because of Gus, Italy for Borini, Mannone and Giaccherini and the USA for Jozy, wretched as he was for us most of the time last season. Anyway, scroll down to vote if you have not already … I intend to keep the poll going as teams falls by the wayside, so the collective Salut! Sunderland preference may change more than once.

One slight change. Taking account of Keir’s point, supported by Jeremy and accepted, of reflection, by Monsieur Salut, votes cast for Uruguay, Costa Rica and Italy – part of our group – will become valid only if and when England depart from the tournament. Even though this is just a spot of fun, it does seem inappropriate to adopt a team England face in the group stage.

And now on to a sport M Salut does not even enjoy but on which he has been engaging in Facebook banter today with our own Peter Sixsmith and Jake among others.

As many readers know, I spend part of the year in France. I am there now and was, last night, caught up in local fervour for Toulon and Jonny Wilkinson in the French rugby championship final.

My immediate neighbour Francis went up to Paris for the game, as he had for the semi-finals in Lille. This is him, bleary-eyed after his overnight train journey back from the Stade de France but on his way to the homecoming in Toulon, 20 miles away, rather as people 20 miles away in County Durham have been known to flock to Sunderland for such events … 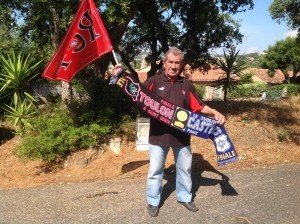 … and my badminton partner Georges the fishmonger was there, too, as he had been in Cardiff for the Heineken cup final against Saracens. On the port in Le Lavandou last night, I met Serge the barber as he hurried home to watch the game and I had a Guinness at Chez Mimi, where the barman Gregory told me he’d be keeping an eye on the screen, too. For the first time that I can remember, I turned on the TV for a rugby game and watched all the way through.

Yet Sixer and Jake tell us rugby union is all too posh, too effete, too wouldn’t-last-six-months-in’t-rugby-league.

I cannot offer a view on the relative rugby codes.

However it’s played, the game does little for me and is also mystifyingly stop-start with key decisions resting on what seem to be insignificant incidents. The French Top 14 final was simply a great occasion, not least because Jonny was bowing out, after a tremendous career, and happened to score 15 of the 18 points that secured victory in which even I could see was a tight game.

My emphatically unposh Bishop-born brother Phil played, coached and refereed rugby union and once, decades ago, accompanied me to a reserve Darlington-Carlisle game after my local paper put me down to cover the game (for the Darlo Evening Despatch and a Cumbrian rag). Without him, I’d have struggled. He got a share of the small overtime payment.

American football seems just as ridiculous, by the way. I remember going along 20 or so years ago to see the Monarchs at Wembley. The only exciting, fluent movement of an otherwise stuttering match was ruled inadmissible on a technical basis I no longer recall. It’s all I remember of the game.

But whatever class issues exist in the British context fade into oblivion beyond our shores. The French people I know who follow rugby are not remotely posh. Georges loves football, too, and his team is Nancy, for heaven’s sake; it doesn’t get much more prosaic than that. Those issue fade into oblivion even when you cross from England to Wales.

I suspect Pete and Jake would get short shrift in the south-west of France if trying to persuade followers of the sport there that they were indulging in a game for toffs. As I said to Jake at Facebook, the only Hooray Henrys my neighbour was likely to encounter at the homecoming in Toulon would have been Brits on holiday.

And I respect and admire Jonny Wilkinson and Toulon. He’s a great ambassador for Britain, making people inclined to dislike us change their tune. Watching last night as he passed along the front row of the beaten Castres supporters at the Stade de France, shaking hands as he went, I detected a good, honest, likeable man. Even if he did once play for Newcastle.

In my gallery above, you see Jonny leading teammates in collecting the congratulations of France’s socialist president François Hollande, socialist prime minister Manuel Valls and socialist sport minister Najat Vallaud-Belkacem (my favourite Frenchwoman after Mme Salut). A toff each and every one!

Recognising sporting excellence, and a high degree of sportsmanship, is one thing, however. It won’t make me like rugby.

If you would like to buy Jonny Wilkinsonls book or anything else at Facebook, please us the Salut! Sunderland link: http://www.amazon.co.uk/exec/obidos/ASIN/0755313402/salusund-21

Next Post
McCormick’s Craic: sing when we’re winning (and losing and drawing)