No real football left Rob Hutchison at a loss over the weekend, until he was lured by the prospect of a carvery for £8 at the Hayes Lane ground of Bromley FC, from the Conference South. He enjoyed the day – as our Pete Sixsmith, who lightens the load of being a Sunderland supporter with frequent forays into non-league territory, might have told him he would – though the home fans would have preferred a different outcome …

Unexpectedly, I found myself with nothing to do on Saturday (missus out, kids out) and as it was Non League Day, I took myself off to by local Bromley FC to see just what is was all about.

The club ran an advert in the local rag for their NLD bash and with an £8 carvery on offer and that kinda swung it for me. Bromley were founded in 1892 and have been at their ground in Hayes Lane for 76 years. A few runs to the second round of the FA Cup has been as good as it got over time, but they have a long non league heritage in the Isthmian League and winning the London Senior Cup on numerous occasions.

They have a tidy ground with the smart John Fiorini stand hosting ST holders (I’m guessing), a sizeable bar and the luxurious Venue hospitality suite. 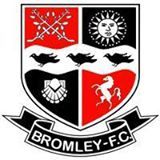 There seems to be a sea change going on at Bromley with recent investment and the club pushing forward with expectancy of the Conference South play-offs as a minimum this season that could put them on the cusp of the cusp of the big time. They also have the facilities to raise good revenue on non match days which is so important nowadays. Tickets were £12 with a 50 per cent discount if you showed your PL season ticket if you had one.

Around 100 – 150 got involved in a splendid carvery and there was a real sense of vibrancy and an upbeat feel among the suits before kick off.

The club laid on BBQs and food and drink around the ground, bouncy castles and penalty shootouts for the kids, a mandatory Ice Bucket Challenge at half time, and according to a steward the numbers were up from an average 700 to nearer 1500 on the day.

Sadly on the pitch 2nd place Bromley stumbled to a Mackemesque 1-0 home defeat to lowly Chelmsford City. Dominating possession and goalscoring opportunities, they lost to a soft goal just before half time, after their captain came off following a nasty landing. Even at this level, one defensive lapse can prove costly.

A penalty to the home side was skied, Phil Jones style, after 50 minutes and for all their efforts they couldn’t break down a resolute Chelmsford City who still looked dangerous on the break.

Adam Burchill, a prolific goalscorer for Dover and Gillingham in years gone by still has great touch and neat movement but seems to have lost that killer instinct in front of goal and was hauled off just after the hour mark.

The locals were just typical football fans, no different from any Premier League spectators. They all knew better than the ref but I guess the difference at this level is all the abuse directed at the players and managers of both teams (and by golly there was plenty) was heard by them loud and clear.

Changing ends at half time seemed to be order of the day, and the ice cream vans were doing brisk business, although sadly I didn’t see any monkey’s blood topping being served. Missing a trick there like. Chelmsford’s travelling support numbered about 50 and they made more noise than the locals as at least they had something to shout about as the game wore on; maybe they were Mackems in disguise. FT and no queues to get out and I was home in 15 minutes.

I came away having enjoyed the day, although to be honest I still don’t feel any allegiance towards my local team after living in the town for 10 years. But that wouldn’t stop me turning up now and again to the odd midweek game in the future.

The club certainly seem to be going in the right direction these days and who knows, maybe January will bring “No 17, Manchester United, will play No 63, Bromley FC”. You can check them out at @bromleyfc and #WeAreBromley. I wish ’em well (Monsieur Salut adds: the official club website is at http://www.bromleyfc.tv/new/ and there’s a Facebook group at https://www.facebook.com/bromleyfc.

9 thoughts on “Hutch’s Patch: how the other half lives (and, in Bromley’s case, loses)”