Colin Randall writes: John McCormick supports Sunderland, of course, but lives in Liverpool. Even if he did not, he’d be entitled to a view about Liverpool/Everton stadium plans. After all, we’ve all been, or most of us have, to Anfield and Goodison. Here is what John makes of the interminable ramblings in Scouseland about where the two sides should play …

On Tuesday (Sept 16), the local news carried an item about Everton’s plans to build a new stadium about a mile from Goodison. The venue, Walton Hall Park, is one of the excellent Victorian-era spaces that abound in this surprisingly green city. Goodison itself, as you’ll no doubt know from the oft-heard Mersey derby cliché, is just across another Victorian park from Anfield.

You might think, from hearing yet again about that “short walk across Stanley Park”, from reading about the city’s Victorian splendour, indeed from the name of the stadium itself, that Goodison Park is set in a leafy glade.

Far from it. It’s a 19th century football ground, stuck up against terraced housing and surrounded by busy narrow roads and then a cemetery. From Architecture to Zone it’s more like Roker Park than any other ground I’ve seen. There isn’t room for Everton to expand, hence the many plans to leave (to King’s Dock, then out of the city, now just across the ring road).

Everton have been complaining about a lack of money for years. They can’t make Goodison much bigger, so it can’t generate a lot of income (relatively speaking) but as they don’t have much money they need some kind of input in order to develop a bigger ground. How will they solve this problem? I don’t really know and I’ll believe their new stadium when I see it.

Everton’s move to Walton Hall Park was first mooted a while ago and today’s announcement made me wonder about its timing; any Everton plans are light years from completion and no one has any idea where the money will come from.

Was the announcement therefore made to steal some of Liverpool FC’s thunder, given that the airwaves, almost full of their return to European football after five years, still managed to report that the city’s chief planning officer has recommended approval of plans to redevelop Anfield?

Apparently not. Putting newspaper and TV articles together it seems the city council supports Everton’s plans and that, because the planning blueprint for the city has to show what areas are available for what type of development, the possible use of Walton Hall Park has to be made public. That may be so but I still wonder. There is a fierce rivalry between these clubs and the reds are hogging the limelight.

Over the years there have been many ideas from both teams – relocation, redevelopment, rebuilding and so on. Groundshare was even mooted, although perhaps not by the clubs. Planning blight from undelivered promises has wasted the districts of Anfield and Walton, leaving much of the area around the clubs a sorry mess.

Now, maybe, things will change. “Project Anfield”, as Liverpool’s plan is called, will cost in excess of £260 million, with £75 million being spent on the ground. It will not only increase the size of the stadium but supply new housing, offices and a hotel, with businesses apparently queuing up to get on board. Subject to full approval, and allowing for a consultation period, work could begin in the New Year. Local houses have already been bought up and demolished to allow room for expansion and for public space.

That’s about as far as it’s gone but it does at least demonstrate Liverpool FC is determined to stay at Anfield and be part of a regenerated area. But does that area include Goodison Park and its environs? While Everton look increasingly likely to leave Goodison for a new build, though more likely than not to stay nearby, no one’s sure what will become of the current ground. It’ll be there for a while whatever happens; plans for a new stadium might be put forward “in a year or so” , or words to that effect. 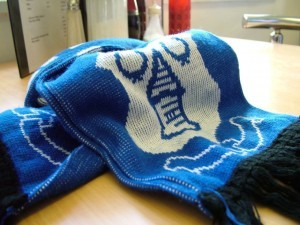 We’re left in a position where there are plans for the regeneration of Anfield which look good on paper. However, they have taken years to get this far and they still haven’t come to fruition, nor do they allow the city planners to include a stadium-sized space a mile or so to the north. This can’t be good for the city. Why take 20 years to develop one side of a Victorian park and then leave one end of it, not to mention feeder roads, blighted for how many more years afterwards?

This makes me wonder if an opportunity has been missed, by the clubs and by the city fathers.

Liverpool FC will at least have a modern stadium, so they say. But will they? After development their ground will hold under 60,000 people. It will be the fourth biggest club stadium but I’d still argue that it’s not a lot for a team with Liverpool’s recent history and in a football-mad region of a million-plus people.

Furthermore, some parts of the ground (Kop included) won’t be changed and even those parts that are rebuilt may not compare well with modern grounds. See, for example, Matt Scott in “inside world football”. Liverpool could easily fill a bigger stadium, week after week after week, and if they had a more modern one they could generate more revenue from within it. I’m not surprised I’ve heard mention of further development in the future.

Perhaps Everton will overcome the objections that will surely come their way. Perhaps they won’t destroy part of Liverpool’s Victorian heritage. Perhaps they will find a partner to help them build a new stadium. Perhaps it will be built before I’m too old to go.

I’m strictly a neutral in this, and Liverpool and/or Everton’s ground should mean little to me, other than as a place of suffering enlivened only by the rarest of wins, but I wonder if 10 or even 20 years ago the city council could not have banged heads together and made these two clubs, one born from the other, a mile apart, with allegedly the friendliest of rivalries, do something good for the city by building a single, possibly even multi-purpose, stadium that was big enough for both.

What would I have thought if Sunderland and Newcastle had said they wanted to build and run a joint stadium in, say, Felling? I think I could have been persuaded by an argument from both clubs that it was in everyone’s interest. I think I could. I think.

11 thoughts on “How Dare We? A letter from Liverpool (and Everton, wherever that is)”