Malcolm Dawson writes…..Peter Sixsmith has concerns about his manservant Pardew. He let slip his feelings in a beer fuelled frenzy of debauchery and quizzing at the Spice Lounge in Bishop on Monday evening. Despite that he still found time on Tuesday to pop down to London to watch Milwall and Birmingham, do a stint on Radio Newcastle’s “Total Sport” before the West Allotment game on Wednesday, see the Two Blues of Bishop Auckland demolish Birtley in the FA Vase on Friday and finally get to Eppleton CW after the Stoke game to watch SAFC Ladies reduce their title hopes by losing to closest rivals Doncaster last night. All that and he still gets up to write his customary match report in his unique way. Pardew may have earned himself a reprieve for another couple of weeks as Sixer basks in the glory of the first league victory of the current season. Lord Sixsmith, it’s over to you!…. 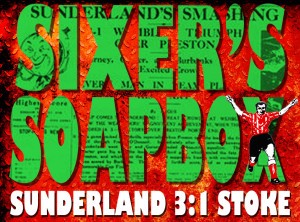 Nice to get up on a Sunday morning and read the papers.
Nice to get the SAFC wrist watch out to wear for a week.
Nice to get a white shirt and SAFC tie out for work.
Nice to win the first game of the season after a fairly long wait.

It wasn’t an easy win, not by a long way. Vito Mannone made a number of fine saves to thwart Crouch, N’Zonzi and Assaidi. Santiago Vergini and John O’Shea made some fine interceptions and pulled off some excellent tackles. Lee Cattermole was all over the place, supporting his back four and always looking to push forward.

Cattermole or Shelvey for an England place? Once again, no contest, but the England manager didn’t sign Cattermole and Poyet is not from Croydon. So, Cattermole misses out again. I shall be cheering for San Marino next week.

It was an interesting team selection by Poyet. Out went Rodwell and Johnson, signed from Manchester City at a joint fee of £20m. In came free transfer Jordi Gomez and misfiring striker Steven Fletcher. It was a gamble by our Uruguayan Head Coach and had it not come off, he would have been in trouble.

It did and he isn’t. Within five minutes of the start, Fletcher slipped his man wide, put over a really good centre and Connor Wickham was there to head the ball into an open goal. The defending was abysmal with Wee Shugie McBardsley losing Wickham and Shawcross (an England player according to the City fans) being pulled away from the striker. 1-0, nerves settled and dreams of the 4-0 win over the Potters a few years ago. This City side are better than that one. There is pace in them and in Victor Moses, they have a player who oozes potential if not actuality.

When Will Buckley allowed Stoke to take a quick free kick, Moses was away and he put Charlie Adam (a half decent pantomime villain for those in the crowd who are fixated on things other than their own team – the kind who sing songs about Pardew and Steven Taylor rather than supporting their own) in on goal. He placed a good shot through O’Shea’s legs and across a partially unsighted Mannone to equalise. Poor defending in midfield at first and O’Shea backed off too much – not for the first time this season. Fortunately for us, Moses limped off two minutes later and his replacement, Assaidi, was happier to get involved in petty squabbles rather than focus on being a proper winger.

The goal that put us ahead for the second time was a little ripper(apologies for any Aussieisms that appear here; I am listening to the NRL Grand Final, cobber). A short corner from Larsson to Gomez was met with groans from some. Those groans turned to cheers when the ball was crossed in and Fletcher rammed home a superb header. He has struggled for a while has Norman Stanley. His last goal was a scruffy, scrambly affair at Cardiff and he missed a very good chance to equalise at Wembley. His start to the season has been underwhelming and there are rumours of him being unhappy on a professional and personal basis.

He must have been very disappointed not to make the team at Burnley but he looked decent against Swansea last week when he came on. This week he started and silenced his critics with a fine performance, epitomised by his opening goal. Watch it if you can. See how he starts in the 6 yard box and then takes a step away from his defender, creating the space that he needs to head the ball. Gomez delivers the perfect cross and Fletcher makes full contact with the middle of his forehead, heading the ball down and wide of Begovic. That he celebrated by cupping his ears was a signal to those who have criticised him over the months of struggle. I am not keen on seeing that but I guess it shows that he cares.


His second goal was a real striker’s goal where he took advantage of an excellent dummy/atrocious miss by Rodwell to wrap the game up. This came after a superb run by Wickham who made 50 or so yards as he ran from West Stand to East, leaving Stoke defenders trailing in his wake.
His unselfish square pass was missed by Rodwell and Fletcher took advantage of it to double his scoring for the season and to secure our first victory, one which was both needed and deserved.

It was a good day for Gus. His team selection paid off and his substitutions were excellent. Johnson for Buckley gave us fresh legs at an important time. The former Rochdale man had played well and had nearly scored with a spectacular cross shot, but his naivety was exposed when he allowed City to take that quick free kick that lead to the equaliser. He is a willing runner and different from Johnson in that he is pacier and more direct. However, Johnson’s arrival gave us someone who could hold the ball up and keep it in tight situations.
Rodwell and Bridcutt replaced Gomez and Larsson ten minutes later, at a time when both were flagging after good games. Larsson was as he always is, hardworking and solid while Gomez is a lovely player at times, subtle and thoughtful, a footballing equivalent of Ken Rosewall or Manuel Santana, tennis players who eschewed the sheer physicality of the modern game.

Bridcutt did well and supported Cattermole in snuffing out the Stoke midfield. Rodwell ran around a lot but hardly touched the ball and he really should have doubled his goals total for the season. Fortunately for him, Fletcher was alive and waiting to take advantage of his error.
The other results were interesting and threw our win into sharp focus. Had we not taken all three points, the pressure would have been on. At the time of writing, we stand top of the bottom half of the table, although this will have changed by 4.00p.m. this afternoon.
But compared with this time last year, we look far healthier and the club is happier. We have 8 points, are currently above Spurs and Everton. The side looks better balanced and the Head Coach is an intelligent, articulate gentleman as opposed to an intelligent, articulate megalomaniac. We have difficult games coming up but we have options in all positions apart from left back, although Patrick van Aanholt looks better every week.

The Observer published a series of charts today and we appear in 75% of them. Despite Fletcher’s double, he hasn’t made the top scorers list, but van Aanholt is in the interceptions table (18; Jedinak of Palace is at the top with 23). We are 6th in the dribbles league with 126, well behind Arsenal who are top with 186 – but who wants to play like them. And Vito Mannone is top of the goalkeepers chart, saving 76% of the shots hit at him. Add to that Steven Fletcher making the Opta Team of the Week and things are looking good.

The glass is two thirds full at the moment. We have a week off now in order to prepare for topping it up at St Mary’s. Three days in Salisbury and a couple of sessions in The Duke of York await.

5 thoughts on “Sixer’s Stoke City Soapbox: fair dinkum from the lads in red and white”