“you must be pretty confident today” I said to the West Brom father and son combo as we grabbed a burger on our way up Millennium Way.

His reply “Not really – this looks like a nil nil,” led to my asking about his thoughts on Pulis and he admitted that although not his first choice the new manager had quickly got them organised and playing together. “He’ll have them sitting back and playing for the point,” was his spot on prediction. I probably enjoyed the burger slightly more than the game though not much more. It wasn’t a classic (burger or game) but if we’re going to draw 0-0 I’d rather we did it looking to get forward and win rather than by sitting back and risk defeat. West Brom rarely threatened and never looked liked scoring and we played most of the match in their half. But Johnson’s effort apart Ben Foster had a pretty easy time of it. He had one moment of nervousness after a cracking shot from Larsson but apart from that his only contribution was to catch the ball, run forward a few yards then throw himself on the ground unchallenged writhing around in agony as a vital few minutes ticked away. Pete Sixsmith was there and his post match comment to me “at least we didn’t lose” summed it up nicely. His slightly longer and more erudite take on things is here….. 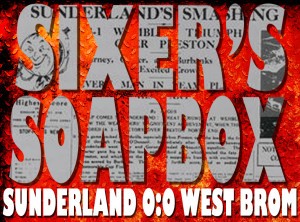 It was better than Queens Park Rangers and it was better than Bradford City – but really, it wasn’t very good as we huffed and puffed our way to an uninspiring goalless draw with an equally uninspired West Brom team who will be down there with us until the end of May.

There was an improvement. We never looked like conceding and we worked hard, particularly Seb Larsson, who is probably our outstanding player this season. He ran and ran and ran, urging the other players on and showing why he deserved his contract extension last year. However, all Larsson’s excellent running in midfield is to no avail if we have no creativity there – and we haven’t. His partnership with Cattermole (good to see him back) may well be crucial in keeping us in this league for another season of mediocrity, but the lack of players who can open up a defence is worrying.


Alvarez shows signs of being able to do it, but he is frustratingly ineffective, often running up blind alleys and wanting to beat a man twice or even thrice. Do we persevere with him and hope that he comes good? We don’t seem to have much else , as Giaccherini appears to have succumbed to an endless series of ankle injuries. Johnson equally tried to open up a resolute and physical Baggies defence but he too got nowhere. Pulis has his midfield and defence so well organised that they fill any space available and it needs a quick killer pass to get round them – but we don’t do that.

After match discussion centred around the officials, as it usually does. Unlike Mourinho, both Poyet and Pulis voiced their opinions on the incident that could have been the turning point. According to Pulis, “old ladies on the high street take more of a knock than that and stay on their feet”, a statement which won’t win him many friends in the old lady department. Poyet, like 40,000 Sunderland supporters, thought it was a red card as Lescott denied a clear goal scoring opportunity and he was the last man. Initially, Mike Jones didn’t give it, but his assistant flagged, we hoped for a penalty and expected Lescott to troop off. We got neither, one rightly, the other wrongly. If it was a foul, it had to be a red; yet another serious error by an official and one which may prove to be very expensive.

The assistant then got himself in the old ladies’ least favourite manager’s good books when he gave Adam Johnson offside as he slotted home Ricky Alvarez’s clever pass. Those who stayed up late to watch MOTD know that Mr Hatzidakis got it wrong. No gifts from this man with a Greek sounding name.

The rest of the game trundled on and the crowd retreated into their coats as a cold wind swept the stadium. A flock of seagulls (real ones, not the ridiculously coiffured 80’s pop group) swept and soared and could have nested in either penalty area, there was so little happening.

Not quite a stinker in the QPR class or a disaster in the Bradford mould, but another lost opportunity and it means that we need to take points from the next two away games at Old Trafford and the KC Stadium. To do that, we need to display some creativity and urgency to go with the undoubted effort and commitment that the players showed on Saturday. The crowd got behind them and showed that they wanted manager and players to succeed.

But, as I often remind students, wanting to do well and actually doing it are two completely different things. At the moment, we are struggling to get a worthwhile grade in our annual relegation exam. The fear is still there that we might fail it this year.