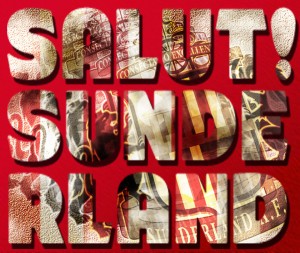 Someone had to win and the rest of us had to lose. The competition to find a name for Sam Allardyce’s post-match thoughts, or those sent out by the press office with his signature, has run its course.

Sam Allardyce’s e-mail after each win, defeat and draw will assume the title SA’s Essay – or maybe it should be SA’s Essays – with many thanks to Joan Dawson, whose declared yearning for a Salut! Sunderland mug drove her to offer several options.

The editor’s choice has been cleared with Joan’s brother, our deputy editor Malcolm Dawson, who was among those offering the nearest we got to serious rivals for Joan’s choice.

Joan was herself de facto deputy editor in the early days of this site and had previously coordinated content (sounds like some grim new media term for what used to be called editing) for Wear Down South (previously 5537), the newsletter of the London and SE branch of the Sunderland AFC Supporters’ Association, to which Monsieur Salut owes his renewal subs.

Joan’s life-changing prize is a mug from Salut! Sunderland‘s Guess the Score sponsors, Weardale-based Personalised Football Gifts and will bear, as the name on the No 12 shirt, Joan or Dawson as she prefers.

There was a bumper electronic postbag of entries. As well the 42 comments here,. most of them suggesting titles, there were several at Facebook and Twitter and, just before I began writing this, an e-mail from a Chelsea-supporting friend proposing Only Hear for the Wear.

All of these are rubbish but I’m desperate for a personalised mug and if you don’t enter ….

Not everyone will agree. I liked several of the others put forward, including George’s Play It Again Sam, which I also suggested in the original piece. Then there were brother Malcolm’s Fat Sam’s Speakeasy, Jake’s Telegram Sam, the compelling simplicity of Ken Gambles and Eric Bowers’s Sam Says and several more worthy shots.

Some excellent entries fell to earth on the grounds of being too pessimistic (Sam Old Excuses, from Mike “Ols” Allcock at Facebook) or the opposite (Sam Enchanted Evening, from Bill Taylor here and Virginia King at Facebook).

And SA’s Essay it is. No favouritism in play; I just thought it the best of the bunch. Over to Joan to make her Oscar-style winner’s speech and tell us which name she wants on the shirt.

See ll the fofficial
Only here for the Wear?