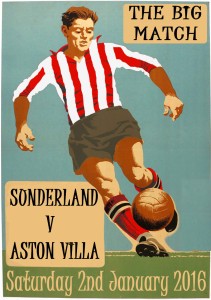 Competition time again. First news of two winners. Malcolm Ray not only came up with the correct score for the Liverpool game he also appears to have Russell Grant like superpowers. Here’s what he wrote “0-1 defeat – will defend well with just the one almighty blooper whilst yet again not being able to find out where the opponent’s goal is.” Can’t get more spot on than that. Two mugs (it was a roll over) courtesy of Weardale based company Personalised Football Gifts will be winging their way to him as soon as M Salut gets over his New Year sickness bug. If you’d like to have a go at winning one then enter your prediction in the comments section below. In the event of two or more correct predictions the first correct scoreline recorded on the site will be the winner (whether or not you are a first time poster and have to wait for your entry to be approved) and M Salut’s decision as always will be final. Fans of both clubs are welcome to enter and the design of the shirts will be changed to the Claret and Blue should a Villa fan prevail. With two leaky defences and two misfiring attacks it could be anywhere between nowts apiece and ten all.

Meanwhile, the winner of a £50 voucher from the Classic Football Shirts competition in which Sunderland supporters were asked to name the Club’s top scorer went to none other than our own Jake, a Spanish based supporter and supplier of the majority of the graphics you see on the site, who came up with the correct answer of Bobby Guerney. Unlike those of us who contribute the words, he was eligible to enter and Salut! Sunderland had nothing to do with the selection process. Other entrants should have received a voucher entitling them to £5 off any purchase. Take a look at their website and you’ve just got time to check out their pre New Year’s Day sales on Twitter and Facebook. 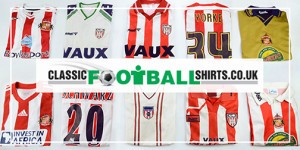 20 thoughts on “SAFC v Aston Villa Guess the Score: anything between nil-nil and tens apiece!”

Next Post
SAFC v Aston Villa Who are You?: ‘all downhill since Martin O’Neill’