Malcolm Dawson writes………if Saturday was immense then Wednesday night was immenser! The first part of the job was completed at the weekend with victory over the Blues of Chelsea. The crowd was there to see the team complete the job against the Blues of Everton and my word were they up for it? What an atmosphere, what a noise! This was the best home support ever at the Stadium of Light, even eclipsing some of those fantastic games we saw in the Peter Reid era. We can truly say the Roker Roar is alive and well.

Chicken or egg? There’s no doubt in my mind that a positive mindset within the crowd spurs on the players, but Big Sam has engendered an ethic and workrate in his team that motivates the crowd. Last night every single player, not for the first time, gave far more than their utmost. Man of the match? For me Kaboul but only by a whisker. Everyone deserved a 10 last night, from Manonne who looked so assured and made some cracking stops, to Wahbi Khazri who ran around all night like (to quote Pete Sixsmith) a Yorkshire Terrier on acid. We have to give the manager credit for that and he revelled, quite rightly, in the adulation he received. We have all seen players who have bought into the club, Bennett, Gates, Hurley, Ball, Quinn, Arca, Gabbiadini etc. and I sense that there are some in the current squad who we can add to that list. Let’s get M’Vila signed on a permanent deal. Let’s make sure that Jermain Defoe entertains no thoughts of moving back to the south coast. Let’s turn over Watford on Sunday and take the momentum into next season. I can’t say we’ll do a Leicester but there’s no reason why we shouldn’t expect Big Sam to move the club into the dizzy heights of mid table security. The downside of that will be not having times like last night to savour.

Of course Pete Sixsmith was in the sell out crowd enjoying it as much as (if not more than) anybody. Now, after getting up early to do his paper round and walk next door’s dog, writing his bit for one of the nationals and doing his bit for the Northern League he still finds time to bring us his take on last night’s proceedings.

And so it came to pass that the Good Lord/ Supreme Being/Call Him What You Will allowed us to pass on the Pirelli Stadium and cancel the visit to The City Ground. Once again, for the tenth successive season, we will be trudging off to Eastlands and Ashburton Grove, while our avian friends can have days out in Wolverhampton, Ipswich and Wigan.

This time, as we have done for the last three years, we saved ourselves. Not by a backs to the wall draw against a washed out Arsenal side or a steady win over a West Bromwich Albion squad who couldn’t wait to get to the beach, but with a rip-roaring, rollicking, rambunctious win over the poorest Everton side I have ever seen. We scored three goals for the third time in five games with these three coming from defenders, ably assisted by an opposition goalkeeper who would have looked out of place in the Brandon and Byshottles Sunday League Division Three.

But that is nothing to do with us. We turned out a team that was determined not to mess up and send us into a potentially buttock clenching last day of the season. Jobs were allocated and jobs were done. The build up was patient, nobody panicked and there was a feeling that the goals would come. 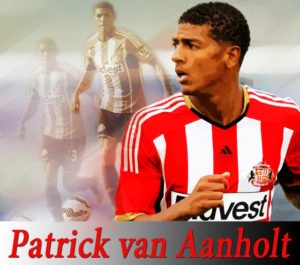 The first one came from Patrick Van Aanholt, a candidate for the most improved player on the club’s books. A defensive liability for last season and the first part of this, he has listened to advice from Allardyce and has responded positively. His fourth goal of the season, following on from ones against Spurs, Swansea and Stoke City was a well struck free kick which caught Robles wrong footed on its way into the net.

There was a mixture of jubilation and relief at this and like London Buses, another one came along a few minutes later – this one thumped home by Lamine Kone, nearly knocking the goal over in the process. Kone has been a sensation since he arrived from L’Orient in January. Big, strong and an inspirational character, he made his mark with the winning goal against Manchester United and then sealed his name in SAFC folklore with two in this stirring victory. Had we taken the plunge, there would surely have been a host of clubs enquiring about his availability. (Don’t forget his flattening of Yaya Toure – Ed)

His partner at the back, Younes Kaboul was, quite simply, magnificent. Up against Romelu Lukaku, he dominated the Belgian international to such an extent, that he spent as much time in the Sunderland penalty area as Mick Jagger does in Britain – Jagger might have got nearer to the goal. It was an immense performance by Kaboul who started the season off being compared unfavourably with Sylvain Distin after that dismal defeat at Dean Court. Since building up his fitness and building a partnership with Kone, he has looked impregnable. Only Jamie Vardy has got the better of him since January.

The other stand out performance came from Yann M’Vila who produced a perfect example of what mid field play should be. Not for him the Shelvey approach of standing in the middle of the park and pinging the ball to the linesman. M’Vila reads the game, rummages around and is there wherever he is needed. He would be a great miss if he were not here next season. Sign him up Sam.

All of those who played last night covered themselves in what passes for glory in our corner of the world. We don’t ask for much but we do ask for effort and each and every player gave us that, from Mannone with a couple of excellent saves to Defoe, who worked the feeble Everton back four throughout the game.The atmosphere at the start was tense. Once Van Aanholt and Kone made the game safe, it was excitable and when Kone wrapped it up was a joyous celebration of our safety and the relegation of the Tynesiders. Of course it was parochial. Of course it was malicious. Of course it was great fun.

“Lock up your horses, there’s going to be hell” warbled the crowd. “The Mags are going down” and “We are staying up” followed. The splendid young man from Toronto sat next to me asked what they were singing. His grandparents were from Jarrow. This was his third game of the season. He got the horses reference – a true red and white. He had been over for a family funeral and this had made up for the sadness of that.

Now is not the time for looking at the whys and wherefores of the season. It hasn’t been a great one (surprise, surprise) but we have come through and have retained our place in the top league. We will be one of the first visitors to The Olympic Stadium and we shall be booking into Webster’s Guest House at Salisbury and supping in The Duke of York again. Shame we have to go to Middlesbrough.

The manager and the players have done well in the last ten games and very well in the last five. They do it for money but also for the supporters. Anyone who has listened to Mannone, Defoe and Borini this last few weeks knows how much they care.

And they also did it for those who are no longer here. Stuart Green would have been beaming after this. Steven Wilson would have been ecstatic and would have ribbed his best mate Brian Neil about the Geordies going down. And Suzi Horan would have absolutely loved it. Those three typify what our club – any club- is all about – the supporters.