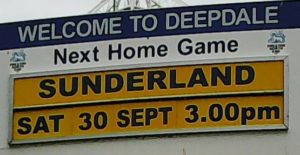 The next two games do provide useful reference points.

The first of them was at Preston, where Simon Grayson had James Vaughan leading the line and Didier Ndong running about further back, and where the Roadrunner Duncan Watmore returned from injury and did well.

In fact the whole team did well. We scored, Preston came back at us and went ahead but we fought back and equalised. And all without Lewis Grabban.

When you look at where Preston finished – one place from the playoffs – you might realise we weren’t always as bad as we think. 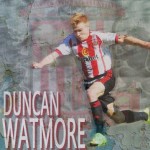 The second of the games came some four months later, at Bolton Wanderers. We had a new manager and he’d let Vaughan go, to be replaced by the even more ineffective Fletcher, one of three loanees on the pitch. Ndong, too, had gone and the Roadrunner was out once again, injured as badly as the first time, but Kone had returned to help shore up a leaky defence.

This was a dire game. Bolton were awful – not a patch on Preston (they lost 1-3 to them a couple of weeks later) – and we were able to dominate possession and win the ball in midfield. Their defence cleared the ball anywhere and everywhere and they struggled to get it forward.

Even so they were able to beat us, from a soft free kick near the sideline, which should tell you how bad we were when it came to not only defending our own net but also creating and scoring goals. In fact, we never looked like scoring.

Two of the three loanees were in key positions and neither inspired confidence; the third, Clarke-Salter, looked OK and had a good game but was destined to receive two red cards in quick succession later in the season and thus become unavailable for half a dozen games. We’d have done better to bring in young ’uns than pay additional wages for these three.

It was at this game that I accepted the inevitability of relegation, and it was at this game that I wondered what had happened to the team spirit. At the end the players couldn’t get off the pitch quickly enough and made no effort to thank the travelling fans who had made a midweek journey on a cold winter night. And it was this as much as anything that got me wondering if Coleman was the right man for the job.

I accept he had been dealt a pretty poor hand, and he appeared able to talk the talk, but I wasn’t fussed when he was released from his contract.

I think he made some poor decisions. Letting Vaughan go without securing a replacement strikes me as one of them, allowing Ndong to go could have been another, ditto signing Kazenga Lua Lua, and why, oh why, bring Camp in?

And then there’s the Rodwell affair.

I found some of Coleman’s pronouncements baffling. Why would a manager not know where one of his players was, and even if he meant (as later argued) that he did not know where he was in his head, is it appropriate for a boss to question any employee’s mental state in public?

It might just have been frustration but I’m of the opinion that Coleman destroyed any chance of bridge building and that he further entrenched positions in a way that did him, Rodwell and the club no good. That’s poor man-management in my opinion.

Perhaps his hands were tied over some of the moves. Maybe I’m being a bit too harsh, and I have to say I don’t know the full circumstances. Who does? The reality is that I’d have been happy enough if Coleman had been given a chance under new owners but now he’s gone I’m not shouting for him to come back.

There were some bright spots. The young players I saw, Asoro, Honeyman and Maja (briefly) showed promise, and there are others coming though, as the Wolves game showed. If Ellis Short has indeed passed the club on free of debt we should be able to hold on to them, and to the Roadrunner, who looked bigger and stronger after his long layoff, as if he’d grown or done some serious weight training. I will welcome his return, based on what I saw at Preston.

Then there are the older players who will be out of contract and surely go, along with loanees we don’t want to stay. We might even get some money for some of them.

Even if we don’t make much of a profit we should improve our financial position and that should create a fresh opportunity to make wholesale change. That opportunity, surely, will be something the new owners will exploit. As Pete Sixsmith wrote recently their leader has considerably more football knowledge and understanding than our Missourian .

That brings the prospect of reconstruction and resurrection, of reconnection with long-suffering fans, of reasons to look forward to the results on Sports Report. Cautious optimism is rearing its head. Roll on next season.

4 thoughts on “Season End Reviews: (6) seeking bright spots amid the mismanagement, including Coleman’s”