Pete Sixsmith wrote about Sheffield Wednesday last season, as you no doubt remember. Today he makes a brief return to that fine old club and the only time we’ve played them in the League Cup. There’s not much more for me to say, given the circumstances of that meeting, as I’m sure you’ll agree when you read Pete’s account of what is, after all, only a game:

Welcome to that fine old club, Sheffield Wednesday, who become rare Thursday night visitors to Wearside. This is only the second meting between the two clubs in the Football League Cup and we hope that this one is played without the historical background of the previous one and that the result is different.

That first meeting took place on the 12th September 2001, the day after the four airliners were hijacked and flown into the World Trade Centre, the Pentagon and a field in Pennsylvania with huge loss of life. The mood was sombre and there was doubt as to whether the games arranged for that night should go ahead.

Driving down to Sheffield was a sobering experience as the radio began to intone the enormity of what had happened 24 hours previously. I travelled with a colleague from work who had very recently gone through a bereavement, so conversation was limited and patchy as we parked up behind the Leppings Lane Stand, where we were reminded of yet another avoidable tragedy.

The previous season had seen us finish 7th in the Premier League, but it also heralded the changing of the old guard and the arrival of what we thought was the new. It was not to be. We slipped from 7th to 17th and, although clear of relegation with a couple of games to go, the sheen had rubbed off Reidy and 12 months later, he was gone.

We had opened the season with a 1-0 win over Ipswich Town thanks to a Kevin Phillips penalty, had lost 2-0 away to newly promoted Fulham, drew at the soon to be Sports Direct where Phillips’ goal was cancelled out by an equaliser from Craig Bellamy and stuttered to a single goal win over Blackburn Rovers thanks to a late Niall Quinn header. 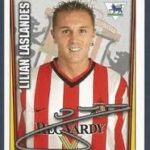 Quinn was contemplating retirement and had suggested that this could well be his final season as a player. Reid had brought in a replacement in flame haired French striker, Lilian Laslandes, a French international, who cost somewhere in the region of £4m when he signed from Bordeaux.

He had a good pedigree. In 119 games for Girondins, he had found the net 47 times and had earned 7 French caps, although he had not made the squad for the 98 World Cup. He was big and strong and it was hoped that he would offer something different from the Quinn/Phillips partnership which had served us magnificently but which was beginning to creak a little.

He was a disaster. In the 12 games he had, he scored once, looked out of his depth, was arrested for driving while under the influence (his defence was that Mickey Gray said I would be ok) and was shipped out to FC Koln and then Bastia before Santa started delivering his presents.

His plans had been thrown into disarray when Don Hutchinson, a player he thought he could build a team around, decamped to West Ham United, leaving a huge gap in midfield. Jason McAteer came in eventually to fill it, but the drive and thrust that Hutchinson gave us was never replicated and with Stefan Schwarz’s star waning, we were light in that department.

Still, when we turned out at Hillsborough on that sad day, in front of a paltry crowd of 12,074, we had hopes of another decent season and perhaps at least one cup run. We were wrong on both counts.

Wednesday, who got to the semi-final, but had a poor season in Division One, fielded;

There are some names there that not even the most avid Owl would remember particularly well. They had suffered a financial implosion as they slipped out of the Premier League in 2000 with Pressman, Haslam and Quinn the survivors of the team that we beat 2-0 at Hillsborough in that legendary rainstorm in April 2000. 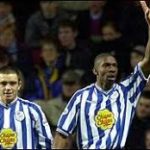 No such result in this one. Efan Ekoku, who was one of the most erudite pundits on 5Live’s team in Russia, put Wednesday ahead in the 30th minute and Kevin Phillips levelled just before the break. Alas, we conceded a penalty on the stroke of half time which Owen Morrison despatched and the players trudged off for their tea and no doubt, a tirade from Reid.

The Great Moment arrived in the 75th minute, when Laslandes scored his only goal for the club, sending the game into extra time, where the Owls finished far stronger than we did. A spectacular overhead kick from Di Pedi, an Italian signed from Perugia and who it was hoped would follow in the footsteps of Paolo Di Canio and Benito Carbone (he didn’t) restored the lead and Argentinian Pablo Bonvin wrapped it up with ten minutes to go.

The journey home was a quiet one as more information of the horrors of the attack came through and it put football into its correct perspective. Ultimately, a 4-2 defeat at Sheffield Wednesday means very little in the whole scheme of things.

1 thought on “The First Time Ever I Saw Your Team (in the League Cup): Sheffield Wednesday”

Next Post
Stoke City, the U23s and the Hetton Irregulars. What more could you want on a Monday Night?