Malcolm Dawson writes……..on the walk back to the car yesterday, I saw a yellow legged gull scrapping for a discarded chip near the sheepfolds. Yellow legged gulls look just like herring gulls, but are the Mediterranean species identified by ……you’ve guessed ……yellow legs rather than salmon pink ones. So it was miles away from its normal place of residence and this after a Sunderland performance that was miles away from the routine fare we have been used to seeing at the Stadium of Light for the past few years.

Before going too overboard and comparing us to Brazil in a somewhat cliched way, as one listener to Radio Newcastle’s Total Sport did, there are still areas that could be improved which both the manager and the players acknowledged in their post match interviews, but coming away from the Stadium of Light in an upbeat mood is something we rarely experienced since the day of Big Sam’s departure. It’s such a positive place at the moment that even Didier Ndong allegedly wants to be part of it!

But someone who was of course there was Pete Sixsmith and he brings us his version of yesterday’s comprehensive victory.

I would imagine that Jack Ross slept well last night. He’s had a tricky week. After having the temerity to actually lose a game to Burton Albion, the doom mongers and naysayers have been emerging blinking into the light, making it clear that managing Alloa Athletic and St Mirren is not the kind of pedigree required to succeed in England.

His team selections have been scrutinised by fans who may not go to games but who still have firmly held opinions on the players he has chosen – “Loovens is too slow, Maja’s not strong enough, Honeyman doesn’t contribute anything” – and the airwaves have been occupied by those who know better than a man who has played football for a living, got his UEFA coaching badges and a M.A. From Herriott Watt University and who now has jumped feet first into the snake pit of football management.

To all his critics, I think the words of the French guard in Monty Python and the Holy Grail are appropriate; “Go boil your bottoms, sons of a silly person. I fart in your general direction. Your mother was a hamster and your father smelt of elderberries.”

This comprehensive destruction of Rochdale is no large wooden rabbit intended to fool the world. It was a marker that has been put down, clearly and comprehensively, that Sunderland mean business in this league and that, with the right balance they are heading for the promised land of Sheffield Wednesday (away) next season.

The team selection was interesting. Both full backs from the disgraceful performance we apparently turned in at Burton were on the bench and in came Flanagan and Hume. Maguire was restored for the unfortunate Wyke (“a sick note” according to one correspondent, who clearly thinks that crashing into goalkeepers is something that is avoidable) and McGeouch was back in central midfield alongside Cattermole.

For thirty seven minutes, the game ambled along with little to excite the support. Then “biff, bang, bosh” and we went into the break three goals to the good and the visitors were wandering around as dazed as Tom the Cat when the anvil hits him. 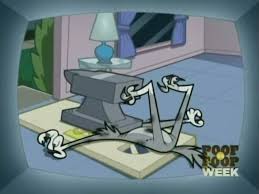 The first goal was a superb cross from Chris Maguire which found Josh Maja unmarked with the ball almost begging to be headed in. It was. Were I a Rochdale fan sat high up in the South Stand, I would wonder about the marking. As a Sunderland supporter, I would place more emphasis on the fact that Maja had slipped his markers and that the excellent Maguire had delivered a cross that even Jozy Altidore could have converted.

Two minutes later, Maja turned provider, feeding Gooch in the box and Rathbone’s challenge was as clear a penalty as you will see. Up stepped the American to stroke it home and continue in the vein of Jim Baxter, Gary Rowell and Jermaine Defoe as Sunderland Spot Kick King.

Gooch has come in for some criticism recently, some of it considered. He does tend to try to do too much, not always a bad thing when you consider some of the players we have had who have got away with doing too little, but the manager appears to have instructed him to be more direct and play the ball early. Not bad advice from a man who has only managed Alloa Athletic……

The second half allowed McLaughlin to show what an impressive keeper he is by pulling off two excellent saves as Rochdale looked for some respectability. He is a keeper who has the confidence of his defenders, not something we saw last year. (There was also a cracker from a free kick in the first half – MD)

It also showed that referees can get things seriously wrong. When Henderson’s elbow caught Gooch full in the face, it was either an accident or a red card. I would suggest the latter, so why Mr Kettle waved a yellow at the Dale captain is a mystery to me. It was a flaw in another solid refereeing performance at this level.

Not that it worried Gooch. Ten minutes later, he took a fine pass from Maguire (who else) and drilled in number four, cementing the victory and making us dream of handing out the proverbial thrashing and keeping a clean sheet.

It wasn’t to be as there was some hesitation by Baldwin (he may have been pushed by Williams in the build up) (he was….it was right in front of me and the linesman who chose to ignore a clear foul – MD) and substitute Done gave the visiting support something to cheer. Which they did. They brought a good following, about 40% of their home attendance, for what we hope is their only visit to the Stadium, unless we draw them in the Cup sometime.

Maja and Maguire departed early to rapturous applause from the crowd and Sinclair and McGeady came on to test their fitness. Both have attributes that will see us through a long season and when they are fully match fit, they will offer us alternatives which a former Alloa and St Mirren manager will be able to call on – if he is good enough to recognise their abilities.

Maguire had an outstanding game. He has been a bit of a wanderer in a career that has never really taken off but he has some memorable days. He hit the winner for Kilmarnock against Celtic, the team he supports, he rattled in a hat trick for Derby County against Pinxton in the Derbyshire Senior Cup and on his debut for Coventry City, he scored two free kicks late in the game at MK Dons to give the Sky Blues an unlikely victory. But a standing ovation from 27,500 Sunderland supporters must be very high up on his list of career highlights.

The whole team had a better balance about it and looked far more comfortable. The opposition were limited, neither as fired up as Oxford United or as competent as Fleetwood Town, and were never at any stage in the game.

And so we go to Coventry next week. It’s a game that will test us and our support. 5,000 tickets have been sold which will fill one end of the Coventry Arena and the expectations will be great. A win against a side who are struggling after promotion will be expected and, if we can show the clinical side of our game that was on display here, it is by no means beyond the realms of possibility.

I’m looking forward to events today and can’t wait to see Ndong back in the side.

Then bring on Peterborough……….

8 thoughts on “Sixer’s Rochdale Soapbox: Oh oh oh it’s Maja…….and a dozen or so others!”

Next Post
Sixer’s Sevens: Rochdale undone by a Majastic display