Malcolm Dawson writes……with the festive season almost upon us and Pete Sixsmith up to the eyes with all that he does on this site, to give the old boy a rest, it falls to me to bring you my take on what went on at a cold and wet Stadium of Light last night. 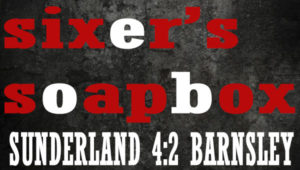 I turned on the car radio at 5.55pm as I prepared to set off through the County Durham hinterland for what I expected would be a tough game in our quest for promotion, switching to Radio Newcastle’s Total Sport just in time to hear BBC weatherman Paul Mooney promise the rain would stop within the hour. Well he got that wrong and it was torrential as I drove through Willington, Neville’s Cross, Chester-le-Street, Shiney Row and over the Wearmouth bridge and it was still persistent as I took my seat in the West Stand.

The team was almost the same as had started on Saturday, with Chris Maguire for Oviedo an obvious swap, the Scot a more natural midfielder than the Costa Rican. Max Power’s rescinded red card meant he was available but I wondered how much that sending off might have affected the energy levels of the rest of the side and how all the adverse criticism Power had received might have affected his mental state. I was fearful that a poor refereeing decision which probably cost us two points at Walsall could have a knock on effect against the side that was starting the night in third place and who knew a win would catapult them above us.

Been a really tough few days, probably the toughest of my career to date. Took its toll mentally and physically. Just really happy to get through the game and win! Tough game against a good side. Weird feeling not being able to play how I want.

Barnsley lined up in their black change shirts, and first choice white shorts with red trim, which for a fashion buff such as myself didn’t look quite right but was brought about by the fact that our home kit was originally intended to have red shorts, but on the new regime’s insistence, when at home we pair our striped shirts with the change kit’s shorts and means the red numbers on the black shorts look slightly incongruous. Am I the only one who is OCD enough to find that irritating on the eye?

In the grand scheme of things it is irrelevant.

Fortunately, unlike the previous Tuesday night home game, irritating phone menace woman was not sitting in front and I could focus on the game. It was immediately apparent that although the personnel was 91 per cent the same as Saturday, they were set up in a completely different way. As you would expect Flanagan and Baldwin were the centre halves in a back four, but Matthews and James had been instructed to play much higher up the pitch when we were in possession, providing width to the attack. Power was sat (not literally!) in front as the defensive midfielder but Honeyman was in a more advanced position, Gooch playing in a central role with the “M People” McGeady, Maguire and Maja moving on up and around the opposition’s penalty box when we attacked but all dropping deep when we lost possession.

Physically, Barnsley looked a lot bigger than us and centre forward Kieffer Moore towered above Jack Baldwin and was even a few inches bigger than Tom Flanagan. That said he had good feet for a tall man and got through some work in midfield as well as providing an aerial threat in front of goal.

We looked OK in the opening minutes and were moving the ball around well. Glancing up to the big screen after what I thought was about three minutes of play I was surprised to see that almost 10 minutes had passed already. It had been pretty even up to that point with Adam Matthews showing some good skills down the right wing but it was Reece James on the left wing who created the first clear cut scoring opportunity when his peach of a cross found Josh Maja in space in front of goal, but the young striker steered his header wide. For a young man of his ability it would have been a big disappointment, just as it was for those of us watching. But it was an encouraging start.

We keep saying there are no easy games in this division and Barnsley were producing some decent moves of their own, without really putting any pressure on Jon McLaughlin and shortly after an opportunity for the visitors came to naught we had a great opportunity ourselves to go ahead. Aiden McGeady found himself in the penalty area and twisting and turning was tackled by Ethan Pinnock, who perhaps slid in with the wrong leg. Did he win the ball? I wasn’t sure from my seat but when the Irishman went down the ref pointed to the spot and it was McGeady himself who took the resulting penalty. It may have been a soft decision and had I been a Barnsley fan I might have argued it shouldn’t have been given, but after a stuttering run up and a brief pause that was just this side of what is legally allowable, McGeady sent the keeper the wrong way and tucked the spot kick away.

One minute later we were two nil up. The ever improving Adam Matthews, once again marauding down the right, played a lovely ball in to Josh Maja, who took a touch with his right foot, made space and shifted it to his left and curled in a lovely shot from the edge of the box beyond the reach of Barnsley keeper Adam Davies.

Almost immediately, Maja could have, probably should have had a third, when he again headed off target after a wonderful cross from Chris Maguire.

We appeared to be cruising at this point and with half an hour on the clock, Gooch earned himself more Brownie points (which he was to need later), first by clearing off the line then going up the other end and finding the net to put us three ahead. The ball was played out to the left, Honeyman was tackled and left sprawling and whilst the crowd around me were berating the ref for not blowing, the skipper stuck out a boot and prodded the ball on to McGeady who set up Gooch for another left footed curler into the top corner from the 18 yard line.

This was a similar situation to that we had found ourselves in against Scunthorpe and the bloke beside me asked if I could settle. The lady in front asked if I had a bet on as I explained why I’m never relaxed unless we have at least a four goal lead. The next 50 minutes or so just reinforced my cautious approach as The Tykes got back into the game.

They got one back just before half time as full back Zeki Fryers got to the corner flag to set up Moore in front of goal. McLaughlin pulled off a terrific save but Gooch fluffed the clearance, first slicing the ball vertically then chesting it weakly straight to the feet of Moore, who had dropped back to the edge of the box. He made no mistake and scored the third left footed goal of the evening. McLaughlin might have saved that effort too but in trying to block the shot, Jack Baldwin deflected the ball over the Sunderland keeper.

Those around were complaining that we had taken our foot of the gas and it certainly looked that way as passes went astray, we struggled to maintain possession as Barnsley continued to press and the half time whistle blew at the right time for the red and whites just after Cauley Woodrow had swivelled and fired a right foot shot against the post. 3-1 was nervy enough. 3-2 would have been heart in mouth time.

Sometimes it is easier to criticise our own than give credit to the opponents. At 3-0 we were comfortable and showboating. The crowd were cheering every pass as we maintained possession, Matthews back heeled, Gooch performed what in ballet terms might be deemed an entrechat as he flicked the ball on and I wondered if we would start to tease the 1,500 or so visiting fans with a chorus of “It’s just like watching Brazil”, a song they sang themselves in their Premier League days. But they upped their game and made it hard for us, grabbing another when Moore headed home a corner unchallenged at the near post.

Immediately before they scored Jack Ross had replaced Maja with Luke O’Nien, a move which which baffled some, but Maja walked off clutching his shoulder and as I pointed out to those questioning the absence of a recognised centre forward, we had scored twice at Walsall without an out and out striker on the pitch. But now the nerves were jangling as the Tykes were back in the game.

At the weekend we watched the game anxiously after the sending off, then with hope as McGeady pull one back, then with joy as the Lads fought back to earn a point in the last minute. Last night it was the other way round and at 3-2 it was a case of hoping not to see a comfortable lead wiped out.

As a Barnsley attack broke down Maguire found himself in the clear and one on one with the keeper, who had rushed out of his area, would expect to score 8 times out of 10 but this was one of the two when he couldn’t convert.

McGeady, who had put in a good defensive shift as well as causing the visitor’s defence problems all night, found space on the left and fired in a teasing cross which O’Nien got a head to but couldn’t deflect into the net. This was nowhere near as straightforward a chance as Maja’s two earlier headers, but the ex Wycombe man was to get his reward in the 84th minute when we found our passing skills again. With Sunderland pressing high up the pitch, the ball broke for Gooch, who side footed to the tireless Honeyman who drove forward a pace or two before sending out a diagonal ball to McGeady who in turn squared it across the keeper for O’Nien to side foot home.

And that was it more or less. Five minutes of added time were seen out. Oviedo was brought on to kill a bit of time and as the 4th official put the wrong number on the board, Honeyman handed the captain’s armband to Power, who had been effective, if low key, all night, before taking it back when the number 10 was swiftly changed to 11 and Gooch left the field.

At the end O’Nien, with his trademark massive grin, gave his shirt to a young lad and we left the ground happy with the three points. We had seen the potential this side has in the first half hour, then became frustrated as they let a strong position slip but let’s not do Barnsley a disservice. They are a decent team who will be in the mix at the end of the season.

And the rain had stopped on the walk back to the car.

Click here to see the match highlights courtesy of safc.com

11 thoughts on “Sixer’s Substitute’s Soapbox: home and dry on a wet night on Wearside”

Next Post
Sixer’s Sevens: Shaky moments v Barnsley but we take the points