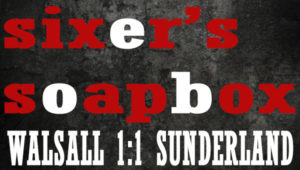 This match was a new experience for me. It was the first time I had attended a 2nd Round F A Cup tie. I missed out on the defeat by Scunthorpe in 1987 as knowing my luck I was probably sat on the bench for Shillington in a South Midlands League fixture.

The first time I visited Walsall was at the previous Fellows Park ground, for a 2-2 draw in 1987 for a Division 3 fixture. They moved in 1990 to the Bescot Stadium and it was another 9 years before I visited there with my brother for a 5-0 League Cup win.

I always look out for Walsall’s results. A good friend of mine is a regular home and away Saddlers fan. Like Sixer she has done all 92 grounds where I have another 15 to go. Consequently when the draw was made I was disappointed as I wouldn’t be clocking up a new ground and in addition I would be making the same journey two weeks on the trot.

I decided on the same travel arrangements as last week. In hindsight not a good idea. The 8 carriage train from Northampton was now only 4 and was standing room only. I was particularly annoyed by the drink induced banalities of the mixed group of youngsters up for the day at Birmingham’s Christmas Market, who prevented me from concentrating on my morning paper. I am sure Sixer and I were never such bores when we cracked the cans open as soon as we got on the train at Darlo in our more youthful days following Sunderland!

With paper unread I met Mick in The Shakespeare just outside New Street Station. Same again as last week and once again not such a good idea. Last week the toilets were out of order and as beer drinkers we didn’t stop long. This week the toilets were theoretically open but resembled a shallow lagoon! We didn’t stop long and headed up the road to The Trocadeiro. With a seat, decent beer with toilets to match we stayed put and then caught the 2.27pm train to Bescot.

The ground itself seems rather unbalanced. Since opening in 1990 it has replaced the original stand behind one of the goals with the much larger Choice Stand. It was completed in 2003 and there were rather ambitious plans to replicate it at the other end. They were going to finance it by having the largest advertising screen in Europe which would face the M6 motorway and cater for passing motorists.

With O’Nien in for the injured Honeyman and Oviedo replacing McGuire at the last moment, Jack Ross selected a strong side. The game started in much the same way as the previous week prior to the sending off. Sunderland were in control and it only seemed a matter of time before the game was won. However it did take us 20 minutes before we created a decent chance. A strike by Oviedo was slightly deflected by Maja and saved by their keeper. Our dominance eventually paid off when McGeady finished off Oviedo’s ball across the six yard box.

I was now so confident that I loaded up Sixers 7 into my phone, “Always in control with eleven men today.” I thought I would wait until the second goal went in before pressing send. Needless to say that second goal never looked liked coming in the second half and Walsall looked the likely winners especially when Cook equalised. The hard working, Newcastle supporting Cook continued on from last week and unsettled our usually composed back four. It was inevitable that he would get the equaliser as he finished off Devlin’s cross from the edge of the box. The centre forward then had further chances. He could have won the game with a header that hit the bar and then another which he hit directly at McLaughlin.

I was glad when the final whistle came and that progress had been made from 1987, when we didn’t make the traditional Monday lunchtime 3rd round draw. Needless to say I wasn’t so pleased about the prospect of another 460 mile trip a week next Tuesday.

1 thought on “The Chapman Report from Walsall: “That second goal never looked like coming””

Next Post
Sixer’s Cup-tie Sevens: Walsall and Sunderland both make the 3rd round draw.