John McCormick writes: all being well I’ll be there. Given the chance, what self respecting football supporter wouldn’t go to see his team play Accrington Stanley. This is history. Proper history.

Forget your Etihads and your Emirates, your millionaires and billionaires, this is what it’s all about.

This is our first ever game against Accrington Stanley. We have never, ever played them before although we have clashed with their predecessors, Accrington FC, on six occasions in the Football League, winning four of them and drawing and losing the other two. We first played them in our inaugural season of 1890-91, November 22nd to be precise, crashing to an ignominious 1-4 defeat at Thornyholme Road in front of an estimated crowd of 1,000. Our team that day had some players who became club legends and was;

No doubt the Victorian version of the message boards went haywire that day, with carrier pigeons arriving at the Sunderland Echo offices demanding that manager Tom Watson be sacked and that the likes of Doig, Hannah and Murray be binned as soon as possible and that the kids should be given a chance/new players should be signed asap.

After that, the nearest Accrington got to us were defeats by two goals as we went on to dominate the League and they dropped out of it. There was a 6-0 win at Thorneyholme Road and 4-1 and 5-3 wins at Newcastle Road as Accrington’s gates declined and ours improved dramatically. They resigned from the league in 1893, a league that had Darwen, Blackburn, Burnley and Preston all clustered round Accrington.

Stanley was a club that was perpetually unsuccessful. After becoming founder members of Division Three (North) in 1921, they stayed there until 1960, when they dropped into the newly created Division Four, along with Gateshead, Darlington, Hartlepools (as they were at the time) United and Coventry City, where they lasted for 18 months before they resigned midway through the season.

They owed money for transfers, money to the Inland Revenue and money for services from local companies, amounting to the astronomical sum of about £20,000. A white knight in the guise of Bob Lord, the chairman of the Football League (and of nearby Burnley) attempted to save them but he formally accepted their resignation, and Accrington lost its Football League club.

Nowadays, some speculator from Kuwait or Oxford or Blackburn would move in, but not so in 1962. Lord was an unusual white knight. A butcher based in Burnley, he was anti-TV, anti the FA, in fact anti everything that smacked of change and progress. His name is still whispered to children when parents in Accrington are trying to get their offspring to sleep; “go to sleep or Bob Lord’ll come and get tha’, close down the football club and put you in his sausages.” It works…… 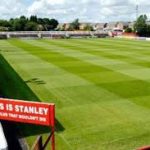 They reformed in 1969 and spent many years in the Lancashire Combination and the Northern Premier League. They had lost Peel Park (Accrington schools used it for football and athletics) and purchased land behind The Crown public house on Livingstone Road.

Over the years, a basic non-league ground has become a tidy, if rather small, Football League venue. The view from the covered end of the ground towards the uncovered terrace (where the majority of our support will be located) is a grand one, and best appreciated if it is not pouring down. The looming presence of Pendle Hill is clearly visible, except when it is raining – which it often does.

Peel Park can still be seen – just. Should you arrive in Accrington early, I recommend a walk out to The Peel Park Hotel on Turkey Street, where there are rooms full of memorabilia and several fine ales on tap. The outline of the old stadium can be seen and when I was there a few years ago, I witnessed an intense game between Year 5 and Year 6 of the adjacent Junior School. 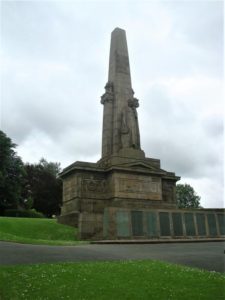 The War Memorial is worth a visit as well. It is situated in Oak Hill Park and is as poignant as any in this country. Many young men from the town responded to Kitchener’s appeal to enlist and the vast majority formed The Accrington Pals, more formally known as the 11th East Lancs. 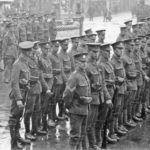 By the end of the day, 584 were killed, wounded or missing, and the Accrington Pals were no more. The names of many of these men are on the imposing memorial that sits on a hill in the park.

I have been to the Crown Ground a number of times. The first time was in August 1997 when Stanley welcomed a Burnley side and their new manager, Chris Waddle for a pre-season friendly. He had Lee Howey with him, signed for £200,000 from us and Claret fans looked forward to a brave new world and promotion to the First Division (Championship in new money). They just avoided relegation and Waddle and Howey left at the end of the season. 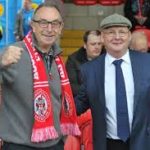 I had a good double up that day. I took in a day’s cricket at Stanley Park, Blackpool where Lancashire played Warwickshire and where the game was played to a backdrop of roaring lions, gibbering chimps and yawning sloths from the nearby zoo. Lancashire’s top scorer that day was Graham Lloyd with a doughty 75. He is the son of David Lloyd (aka “Bumble”), who, in turn, is probably Accrington Stanley’s best-known supporter.

Keep an eye out for him on Saturday.

“Kick Off” published on YouTube by British Pathe April 2014. Accrington Pals by Mike Harding. published on YouTube by Jordan Pilling, June 2011. SAFC photo found at http://www.doigsden.co.uk/images/first.12.jpg If there is any copyright claim, not answered by “fair comment” on the videos and images used in this report please let us know and we will acknowledge or remove as required

1 thought on “The First Time Ever I Saw Your Ground: Accrington Stanley and the Crown Ground”

Next Post
Accrington Stanley Who are You?: ‘borrow a bigger ground? Would SAFC borrow St James’ Park?’