Monsieur Salut writes: we are delighted to welcome Peter Leatham*, chairman of the Accrington Stanley Supporters’ Club, to this season’s classic series of Who are You? interviews. We expect other clubs at this level to raise their game when they play us, since we have ‘big club’ stamped on our foreheads. But our League One interviewees are reaching lofty standards, too. I loved Peter’s response to my suggestion that Stanley might have moved this match to a bigger ground than one holding just over 5,000 to accommodate our fans! …

Salut! Sunderland: who couldn’t warm to “the club that wouldn’t die” – and who deserves most credit for Accrington Stanley bursting back into life: Eric Whalley, then owner of the revived club, Brett Ormerod for the Stanley’s onward transfer windfall or the fans who willed it to happen?

Peter Leatham: I think it’s true to say that all three elements played a pivotal role in ensuring the survival of the club and its return to the Football League in 2006. Eric Whalley was the visionary with the drive and determination, Brett’s transfer fee ensured some bills were paid and the squad improved and the fans help bind it all together. The naming of the new Eric Whalley stand is a true recognition of the part he played at the club.

Promotion last season must have been a wonderful feeling. What have been the other highlights of your own time as a supporter?

Probably the EFL cup run of 2016/17, beating Bradford City, then of L1 on penalties, then beating Premiership neighbours Burnley with a goal in the 119th minute before finally going down to a late 96th minute trademark Dimitri Payet free kick at the London Stadium in front of 40,000 and more than holding our own.

Solid start to the season even if you’ve slipped to high mid-table. But tell us about the trio at the top – Andy Holt (owner), Peter Marsden (chairman), John Coleman (manager) – and how far they can take the club.

It’s really about Andy and Coley, they have a great relationship and long may it continue. Andy Holt is a successful local businessman who has dragged the club to where it is today, developing the facilities from very poor to just about standard, mostly out of his pocket and he has a refreshingly frank and transparent persona who seriously questions the football hierarchy and its methods. John Coleman and his assistant Jimmy Bell understand the club and its ethos and have astounded many by winning L2 with the smallest playing budget and nearly the smallest attendances, they know what they want and how they want to play and stick to their principals.

I know Stanley is one of the nicknames but the club’s proud old name is often abbreviated in that way, too. I understand the local geography. But is it now common usage in the town and doesn’t it devalue the club’s identity (we have two Stanleys in County Durham)?

Most locals refer to the club as Stanley and the town as either Accrington or just Accy.
It is astounding how universally known Accrington Stanley are and we have regular correspondence and visits from many countries

Having finally become aquainted with our own new-look squad, we still sometimes struggle to work out opponents. You seem to have some useful loan acquisitions but who is doing the business for you so far?

Connor Ripley in goal, from ‘Boro, has been solid for us as has Michael Ihiekwe (Rotherham) and Nick Anderson from Blackpool across the back line. Dan Barlaser (Newcastle) has forced himself into midfield and is good on the ball. Both Connor Hall (Bolton) and Luke Charman (Newcastle) have yet to gain a starting berth but have been useful off the bench.

Who over the years has given you most pleasure in Acrrington Stanley colours? Are you old enough to have seen Chris Grimshaw (voted all-time fans’ favourite)?

My personal, and many others’, favourite would be Paul Mullin, who was an traditional centre forward and spearheaded Stanley’s return to the league and is still both record appearances and goal scorer.

And who should never have been allowed near the Crown Ground?

Ironically we had three young keepers on loan whom struggled with us but are still making a career for themselves in Lee Nichols, Jon Lumley and Matt Macey. However we were spoilt with Darren Randolph, Rob Elliott and then Marcus Betenelli in previous years.

I asked earlier than usual about highlights. What have been the lowest points of your time as a supporter?

That’s got to be the final day of the 2015/16 season when we started the day in an automatic promotion place, having scored in every home game that season. Unfortunately we drew 0-0 with Stevenage which, for 92 minutes would have got us promoted, only for Bristol Rovers to score a 93rd minute winner and put us in the playoffs, where we never got started and lost to AFC Wimbledon who finished 10 points behind us.

Describe the club’s rapport with the town, with Manchester so close is there a problem of gloryseeking among younger locals?

We lost a generation of supporters when the club folded in 1962 and wasn’t resurrected until 1968, Accrington folk went to either Burnley or Blackburn less so Manchester. The club are now working hard to generate a younger fan base with over 1,200 shirts being given free every year to all the year three pupils in the borough for the last two and next three years. This is an initiative funded by Andy Holt who is determined to position the club at the centre of its community. We are only a small town with a population of around 35,000 and a growing ethnic community but are steadily growing our fan base with a 37 per cent rise in season tickets year on year, albeit from a low base.

Were you surprised by Sunderland’s sharp decline?

I think the relegation from the Premiership was inevitable after a few close shaves but I didn’t foresee the fall out of the Championship. All clubs have their issues when you scratch beneath the surface and the Mackems obviously have had their share, however you have a strong and loyal fan base which will always generate the revenues required to build back up again.

Other thoughts on our club, the fans, the city and region, Jack Ross? Should you have borrowed a bigger ground to accommodate all the SAFC supporters who’d like to be there?

We will be delighted to welcome Sunderland to the Wham Stadium and I suspect the majority will enjoy the day irrespective of the result. We are a proper football club with strong tradition and run by good people and the idea of borrowing a ground for the match is laughable. Perhaps you would like borrow St James’ Park next time you play Boro to accommodate all ? …… , no I thought not.

Sunderland should get into the top three, especially with your playing budget; ours is just around £2m by the way. If you ask most Stanley fans then to stay up would be a tremendous achievement however a top 10 finish is not beyond us.

The James Maddison question (formerly Neymar but many names have had spells here): he dived, was sent off (second yellow) and then came clean and apologised. A step forward in the struggle to beat the cheats or something soon to be forgotten as other players try to con referees?

Nearly all players cheat in one form or another. Diving should be a red card but the referees have a difficult enough job as it is.

Will you be at our game?. What will be the score?

I have a ST and also run the supporters’ club as well as assist on match days. I would settle for a point but suspect you may be too strong for us, probably 1-2. 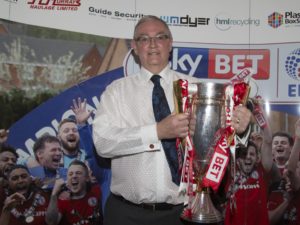 Peter Leatham* Peter Leatham on himself: I saw my first game at Stanley in 2002 and was a ST holder at my hometown club, Bolton Wanderers, at the time. I gradually visited more and more on my spare Saturdays, which given the PL fixture arrangements was most of them. In my opinion money has spoilt the PL and I gradually became more enamoured with lower league, or non league, football as it was then, Its more about honest endeavour and far easier for the average fan to relate to. We can talk to the owner, the manager and the players. I became chair of the supporters’ club in 2016 and we are constantly fundraising to help improve the facilities at the club. We contributed to the Fanzone area and bought the screen for the club and have recently bought new pitch covers for the ground. We also run the away travel and sell match badge pins for all our home fixtures. I am 60, retired and also edited the match programme, as a volunteer, for the past 18 months but passed that back to the club a few weeks ago. Find us on Twitter at https://twitter.com/officalassc and on Facebook at https://www.facebook.com/oassc1/

10 thoughts on “Accrington Stanley Who are You?: ‘borrow a bigger ground? Would SAFC borrow St James’ Park?’”

Next Post
Aiden McGeady up for player of the month. You can vote here to help him win