Malcolm Dawson writes…..you expect the roads to be quiet on a Bank Holiday and they were. I drive to Lytham ten or twelve times a year so this is a route I know well. Over the tops through Woodland, Egglestone and Brough I saw more buzzards and goosander than I did oncoming cars. Kirkby Stephen was busier than usual with loads of people in lycra wandering around with numbers safety pinned to their stomachs, but what constitutes a traffic jam in Westmorland is just a queue for the traffic lights in most built up areas and it took me all of two minutes to get through the town.

On the M6 south of Lancaster a caravan had overturned, blocking the outside and middle lanes with the bonnet of the car facing skywards. There were no police there, so it could only just have happened minutes before but no other vehicles were involved and there were two people standing in the central reservation so hopefully no-one was hurt and although it caused a slight delay the rest of the traffic was able to get around it with the minimum hold up.

There was a good, cheerful atmosphere as befits New Year’s Day and the ground was noisy. There was a moment pre-match which I thought was reflective of how the club is changing the nature of its relationship with the fans.

Towards the end of the warm up and after most of the squad had already returned to the dressing rooms, Chris Maguire hit a fierce shot at the extra goal that is set up for the purpose. Unfortunately he missed the target and the ball struck a grey haired, bespectacled lady full in the face. It would have hurt and the shock would have been greater than any physical injury, but immediately Robbin Ruiter, Craig Samson and Maguire himself were in the crowd, comforting the lady and calling the St John’s people over. They made sure she was OK before making their way back to the changing rooms – something which those around noticed and appreciated. This may have also been the case last season, but this was genuine concern and seen as such.

Once more the hosts showed that there will be few easy fixtures in this division and this was a close game. Indeed the pundits I was listening to on Wave and Radio Lancashire after the match were disappointed that The Seasiders hadn’t got a point (reasonable) or even all three (not so).

What did Pete Sixsmith think? Let’s find out. 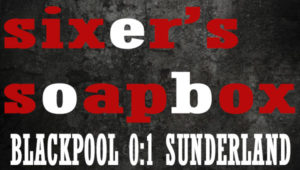 There are worse ways to start off a new year than a bracing trip to Blackpool – and then to return home with a hard fought and well deserved 1-0 win. Last year on the 1st of January we lost at home to Barnsley, a defeat which heralded a raft of loan signings, none of whom were any improvement on the poor players that we already had. We started 2018 shrouded in gloom – and it got worse.

Maybe 2019 will be kinder. We appear to have our club back and the team, although not world beaters, are playing with heart and passion and have bought into Sunderland AFC and what it means. Last year’s crop of players hardly seemed to care.

The journey over was an absolute delight. The coach was full – a mixture of familiar and unfamiliar faces and some returnees who have lost the habit of going to away games. The weather was glorious; clear skies and bright sunshine as we passed through Barnard Castle and over the A66. This is a road I use a number of times a year but usually as a driver. As a coach passenger, you see so much more – and on a clear day, it looks as if you can see forever.

Blackpool was reached before the designated time of 12.00 and the Lancashire Constabulary (out in force) cared not a jot. The town was busy. Our support had colonised the usual pubs – The Castle, The Manchester and The Albert and The Lion – with noise rather than hostility being the order of the day. I wonder if the fact that Charlie Methven pops up in to chat and have his picture taken calms the atmosphere. My travelling companions made for the pubs away from the front and had a jolly good time.

I am hors de combat at the moment as far as ale is concerned, so I went for a wander around the town in search of a late breakfast/early lunch. Blackpool, like many coastal towns, is struggling yet it still has an appeal. 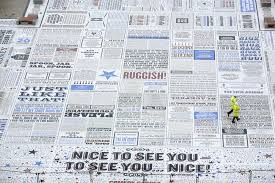 The promenade is wide, the air is bracing and on a day like this there was no better way of blowing away the cobwebs than a stroll along the prom, prom, prom where the brass bands weren’t playing tiddley pom pom pom. I did spend a good quarter of an hour looking at the Comedy Carpet opposite the Tower. It’s a comprehensive list of comics who have appeared in the town over the years, from Frank Randle and Rob Wilton, through Tommy Cooper and Ken Dodd right up to modern comics like John Bishop and Micky Flanagan. I found it worrying that I had to explain to a callow youth who Rambling Sid Rumpo and Frankie Howerd were!!!! 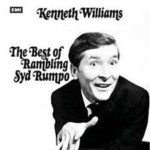 I found a café that was open, opted for a late breakfast and shared my table with a couple from Leeds who could have been part of an Alan Bennett diary entry. They had booked a New Year’s Break at The Metropole, once a very important hotel in the days when party conferences were held in the town, and thought it had gone a bit downhill since last year. They were completely oblivious to the 8,000 Sunderland supporters who were in town saying only that they had “heard a bit of noise but we thought there were some bus trips in from Lancashire.” 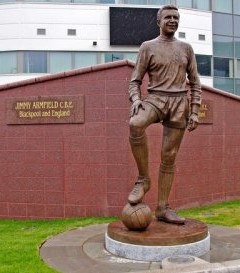 To Bloomfield Road, where I bumped into a former colleague, nicely retired like me, was handed several leaflets by the Blackpool Supporters Trust explaining their reasons for not attending home games and took a (not very good) photo of Jimmy Armfield’s statue. A man of integrity if ever there was one.

There were two changes. Reece James came in for the injured Bryan Oviedo and Duncan Watmore was rested to allow Charlie Wyke to start a full game for the first time since the defeat at Burton Albion. Neither weakened the side and one could argue that the return of Wyke allowed Josh Maja more space to work in and meant that he did not have to do the donkey work up front.

It turned out to be a good game. Both sides have strengths and played to them. Blackpool are a big side but do more than just lump the ball up front. They have some good players at this level and whatever is happening off the field, on the field they work hard for each other. Our defenders had to work equally hard to keep them at bay, with the experienced Jay Spearing making them tick over and Nathan Delfouneso giving them a touch of quality up front. Throw in big men like Taylor, Bola and Gnanduillet and you can see why they are on the edge of the promotion race.

We had more of the ball than they did and created the better chances but there are times when we need a second or even third touch to get moving and this allows defenders to get into position and stop us. A cultured, controlled midfielder who can make that all important first touch pass could make the difference. In the absence of Cattermole (suspended) and Honeyman (injured) it’s an opportunity for Dylan McGeouch to step up to the plate and show us what he can do over the next couple of weeks.

Our goal was a good one. Baldwin (the pick of the centre halves) played a shrewd ball through to the impressive McGeady. He shimmied and shammied and put in an excellent cross which Josh Maja turned in for his 15th goal of the season.

This was Maja’s best game so far. He forced an outstanding save from Mark Howard in the second half and his ability to bring the ball down and then control it and move it on is impressive. We all know about his contract talks and I for one, hope that he signs up – we would find his goals very difficult to replace if he left now. There is talk of Celtic being interested and of paying £4.5m for him. We shall see. He linked well with Charlie Wyke who had a real tussle with centre half Paudie O’Connor.

Wyke had a good game and there are hopes that a goal will soon have him up and running. We think that he is the first Sunderland player called Charlie since The King in the 1960s.

We had a couple of breaks. Gnanduillet thought he had equalised but a combination of good goalkeeping by McLaughlin and excellent defending by Baldwin prevented another Bradford style controversy and a poorer referee than Mr Drysdale (who I thought had a very good game) might have sent Gooch off when he was involved in a scuffle with O’Connor.

The travelling support roared the team home to three very important points and there were smiles all round at the end of the game. I have never seen a stadium with so many away supporters in and so few for the home team and I don’t suppose I ever will again.

Next Post
The Charlton Athletic vs Sunderland prize Guess the Score. Not quite blind faith