Salut! Sunderland: Three defeats and two draws in the last five games and you are down to 16th. Is this a slump or pretty much what ought to have been expected?

Peter Leatham: Unfortunately most teams have a difficult spell and we are in ours. Having 2/3 games in hand on some can’t be discounted but it’s still no substitute for points on the board. 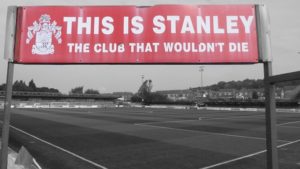 Is John Coleman the right man to ensure you don’t drift further towards the relegation places?

Absolutely. He is sending out teams equipped to win but we are missing our chances. Allied with a few new faces after the closure of the January window which will take time to settle. At the start of the season most fans would have viewed survival in League One as an achievement but the good start to the season probably artificially raised expectations.

Your players, like most visitors to the Stadium of Light, will surely be up for it on Friday night. I believe you gave Derby a run for their money in the cup – is your team generally good at rising to big occasions, big crowds?

We certainly saw recent good performances at places like the London Stadium and the Riverside in cup competitions which would indicate yes. However we still lost both games despite earning plaudits from the critics.

You saw, before the torrent put a stop to the first match how we tend to go ahead but then fail to defend or build on a lead and end up backs to walls. Did you identify obvious weaknesses in Sunderland’s play?

I think it’s true to say that you started brightly but we were probably coming into the ascendancy when the game was abandoned. We were able to use width to generate chances but I suspect the arrival of Jimmy Dunne should help you defensively.

Is our presence in League One, two levels below where we still (perhaps fancifully think we belong) a good thing for the division as a whole? Will there be a bit of a buzz around the town when we finally get to play our match at your place?

Definitely, it’s an occasion to relish and definitely a change from visiting Morecambe or Orient (no disrespect to either). I suspect most clubs will have enjoyed both tussles against a club with a massive playing budget and fan base for League One.

You thought back in December that we’d be top three at the end of the season whereas you’d be happy to stay up but felt your team capable of pushing for top 10. Have you revised either view?

Given recent weeks I would stand by both but our prospects of a top 10 finish are looking slim but you never know!

Which players, yours or opponents, have caught the eye in League One this season? And which of yours could prove a handful for his on Friday?

And what do you make of refereeing standards?

A definite mixed bag with most clubs being able to point to decisions which cost them a result. However the players have a part to play in not cheating fellow pros with a set of antics designed to kid the officials and gain an advantage.

It’s a hard but do-able return trip for a Friday night. How many Stanley fans will cross the Pennines for the game and will you be among them?

We are running free travel, courtesy of our owner who is donating the £10k Sky monies, and would expect close to 1000 to travel. Not big by your standards but probably 50 per cent of our home gate !

And what will be the score?

I think we would be delighted with a point but it’s going to be tough.

* Peter Leatham on himself: I saw my first game at Stanley in 2002 and was a ST holder at my hometown club, Bolton Wanderers, at the time. I gradually visited more and more on my spare Saturdays, which given the PL fixture arrangements was most of them. In my opinion money has spoilt the PL and I gradually became more enamoured with lower league, or non league, football as it was then, Its more about honest endeavour and far easier for the average fan to relate to. We can talk to the owner, the manager and the players. I became chair of the supporters’ club in 2016 and we are constantly fundraising to help improve the facilities at the club. We contributed to the Fanzone area and bought the screen for the club and have recently bought new pitch covers for the ground. We also run the away travel and sell match badge pins for all our home fixtures. I am 60, retired and also edited the match programme, as a volunteer, for the past 18 months but passed that back to the club a few weeks ago. Find us on Twitter at https://twitter.com/officalassc and on Facebook at https://www.facebook.com/oassc1/

1 thought on “Accrington Stanley Who are You?: ‘a Sunderland occasion to relish- at the owner’s expense’”

Next Post
Sixer’s Substitute’s Soapbox: more of a damp squib than fireworks against Blackpool