John McCormick writes: A joint effort brings this to you on a fine morning. Fine not because of the weather, which is a bit iffy, but because we have just won our third in a row and have a semi-final in a couple of days. Malcolm did the proof-reading and uploaded the text, leaving the final layout for me.

Pete Sixsmith, of course, did the hard bit.

The visitors from the far south west came to the cold, craggy north and were repulsed. Their legions made much noise from their strategic position up a height but apart from a couple of oohs and aahs as the ball went past the post, their heroes offered little in the way of thrills and excitement for the Green Army. They were seen off by a highly competent, well organised and well-balanced home team – which, at this stage of the season, is exactly as it should be.

After two thirds of the campaign, Jack Ross appears to have settled on his best team. On the evidence of the last two performances, the central defenders look solid and sound. The full backs link well with their wide men and vice versa. The key area of central midfield is patrolled by two players with more experience than any side in this division. It looks good.

Except for up front, where the two goal scorers brought in during the two transfer windows available, have not compensated for the loss of a 19-year-old in his first season in senior football. There are not many more games for that situation to change; a response is needed sooner rather than later.

But let’s look at the many positives that were on show at The Stadium of Light as March blew in like a lion and had us huddled in our seats, lamenting the end of February’s fabulous weather.

Argyle arrived on the back of five successive wins, fuelled by a rampaging centre forward in Freddy Lapado, whose praises were sung loudly by the 1500 Argyle fans sat atop the North Stand. They were an impressive bunch who had clearly made the long journey to enjoy themselves and, in between supping proper beer (most are better than the rather insipid St Austell Tribute that dominates their part of the country) and having their photos taken outside the Stadium, they sang the praises of the former Kidderminster Harrier loudly.

He hardly had a sniff as Flanagan and Dunne blotted him out. This partnership is working well after a creaky start for the Burnley loanee and he looks more comfortable with Flanagan than he did with Baldwin. Flanagan took a couple of early knocks but recovered quickly while Dunne’s confidence was up after his fine performance at Bristol last week.

Their dominance enabled our full backs to link with their wingers and they did this most effectively. James and McGeady is an established partnership down the left-hand side, while the excellent O’Nien had a new chum in Lewis Morgan as Ross opted switch the Scot with Duncan Watmore.

Morgan had done well in his 30 minutes at The Memorial Stadium and he did even better in the 45 minutes of the first half here. His pace and trickery took me back twenty years when Allan Johnston was weaving his magic down the flanks. He is of a similar build and he has the ability to dribble out of tight situations a la the former Hearts and Rennes man. What he hasn’t quite got is the ability to score. He tried a couple of shots in the first half, but they went wide.

He has an outstanding partner in Luke O’Nien. He is a candidate for player of the season (I would suggest that McLaughlin and McGeady are ahead of him) and whoever scouted this young man should be awarded the Freedom of the Borough as he has been a revelation. I had never heard of him when he signed and, on the couple of occasions I saw him early doors, I wasn’t over impressed so it’s a good job I’m not a scout.

Since October and his first goal at Shrewsbury, he has been a revelation. Good in the air for a man of average height, firm in the tackle and with a pair of lungs that could inflate a barrage balloon, he has shown enthusiasm, commitment and considerable skill as he has cemented his place in the first team at the expense of a highly competent player in Adam Matthews.

The opener came down that right-hand side when Morgan’s cross arrived at the feet of Lee Cattermole, who thumped it into the roof of the net to open the scoring just past the half hour. This was Cattermole’s second successive goal in home games and, after ten years when his scoring record was on a par with the likes of Cec Irwin, Steve Doyle and Danny Graham, he now has five for the season.

He also looks a better player alongside Grant Leadbitter and has made a massive contribution to this pleasing hat trick of wins. No booking on Saturday, no wild tackles, just a player who is enjoying himself in the centre of midfield, where he forms a formidable partnership with Leadbitter. 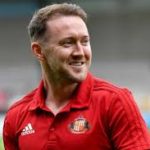 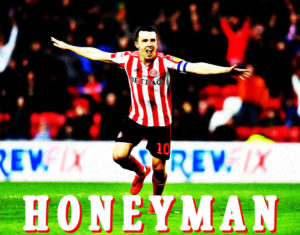 McGeady is our match winner and it was he who set up the second goal. He twisted and turned like a twisty and turny thing and his sublime cross landed at the feet of the energetic George Honeyman, who settled the game with a well-placed shot past the sub keeper.

One of the perpetual moaners who sits somewhere behind and who has berated McGeady for most of the season, has now taken to calling him “Aiden, lad” so he has won over the heart and mind of at least one doubter.

The main problem is up front. Grigg worked hard and manufactured one very good chance but he needs goals. His presence and reputation put defenders on their toes and creates space for the midfielders and the manager will be pleased with his overall contribution but he needs to start finding the net.

Morgan had a poor start to the second half and was promptly replaced by Watmore, who took advantage of Argyle pushing forward, breaking into the box with his pace. Unfortunately, his cross for the waiting Grigg and McGeady was cut out far too easily; he really must produce something at the end of these runs. Wyke and Gooch’s appearances were merely to wind the clock down.

The other results were not helpful. The red card at Southend was hopeful but it says a lot about Barnsley’s mental strength that they ran in three goals while down to ten. The Luton juggernaut rolls on as strugglers Rochdale were dispatched and Portsmouth, basking in Wembley glory, saw off a pathetic challenge from managerless Bradford City to win 5-1. It’s any two from those four for the automatics. In fact, it could be one from three as Luton look comfortable at the top.

Attention turns to Bristol on Tuesday. How about this for a team;

Or do we play the first team?

Next Post
Sixer’s Sevens: Plymouth Argyle stopped in their tracks