The games are coming thick and fast as we get to the fag end and business end of the season. Pete Sixsmith and Deputy Editor Malcolm Dawson are sharing match reporting duties and Pete will be back for his take on the Peterborough and Portsmouth clashes, but today it is Malcolm who brings us his view of the goings on at the Stadium of Light on what turned out to be a pretty decent Good Friday. 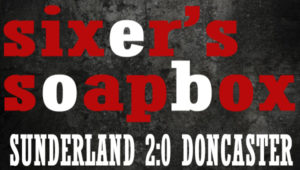 If you needed any proof of the influence of Salut! Sunderland the evidence was there to see yesterday, as we put the debacle of the previous weekend behind us.

In my match report following the home defeat by Coventry City, I suggested it might be time to give Alim Ozturk, the second most forgotten man of the Sunderland squad (after Donald Love) a game and in midweek, Wrinkly Pete called upon the home support to get behind the team and make some noise. With the Dutchman recalled to the starting XI the crowd, especially in the recently renamed Roker End, produced their loudest and most sustained support of the season.

While on social media Baldwin and Flanagan shouldered most of the blame for the inept defensive performance against the Sky Blues, that was far too simplistic an explanation for our first home defeat of the campaign. Though it was no surprise to see them both “rested” for the visit of Doncaster, it was other changes to the side and organisational adjustments which got us back on track. Coventry had no recognisable target man and as such moved the ball quickly, kept it on the ground and turned the two centre backs inside out. But there was precious little support for them from either midfield or on the flanks. With Grigg and Wyke both starting, Honeyman and Morgan had been told to play narrower and the width came from O’Nien and Oviedo who both started that game higher up the pitch. The central midfield pairing of Power and Leadbitter also appeared to have been given instructions to be positive going forward with the result that Baldwin and Flanagan were frequently exposed and Coventry exploited this.

Yesterday, we played with a flat back four and though the full backs still supported the attack when they could, with Morgan and McGeady in wide positions, they could apply themselves more to their defensive duties. The return of Lee Cattermole also strengthened the central defensive midfield position and with just the single striker, Power and Honeyman  helped to break down potential Doncaster threats at source.

That’s not to say we were totally dominant but Ozturk and Dunne were fairly comfortable against the pony tailed John Marquis, who is more your traditional striker than those employed by Coventry, though he might have won a free kick on the edge of the box on six minutes when he was hauled to the ground. But I thought both centre backs played well and dealt with the Donny attacks efficiently in the main.

There was one occasion when McLaughlin had to race off his line and throw his body in the way and another occasion when Ozturk maybe got away with a bit of holding. Donny manager Grant McCann certainly thought they should have had a penalty when, following a free kick and an almost inevitable yellow card for Lee Cattermole, Ozturk and Butler practised their moves for the upcoming series of Strictly Come Dancing and the Doncaster man went to ground. It might have been given on another day, but referee Andy Woolmer deemed it six of one and half a dozen of the other and throughout the afternoon he had refused to give a number of free kicks, mostly when Charlie Wyke had been held as well as that early one against Ozturk. But at least he was consistent.

So we started off with four across the back, but that didn’t mean to say there was no attacking intent and we might have scored twice in the first thirty seconds. Attacking the North Stand for a change, both Power and Morgan had decent chances blocked. After all the pre-kick off flag waving the crowd was up for this and it was just the start we needed.

But Doncaster in a rather smart blue and red change kit were soon on the counter attack and a long diagonal ball from Herbie Kane on the right wing found John Marquis running into space. It was then that the covering Ozturk impeded the Donny man while the referee waved play on. That was on five minutes and we were to go ahead immediately. George Honeyman who showed great energy all afternoon, buzzing about behind Wyke and behind the wingmen played the ball out wide to Aiden McGeady on the left wing. McGeady did what he does, rolled the ball, shimmied, beat his man and delivered a beautiful cross from the corner.

Charlie Wyke, who nearly didn’t play as he was suffering from a migraine as kick off time approached, rose high between two defenders and nodded the ball down and back for Lewis Morgan who struck a powerful half volley inside the left hand post and halfway up the side netting from 16 yards. Exactly what was needed to settle any lingering nerves after the news that both Barnsley and Portsmouth had collected all three points.

We were definitely on the front foot and with 14 minutes on the clock, Honeyman was again involved, this time on the opposite side as he fed Morgan. His deep cross was headed back by Mcgeady and with Wyke lurking the Doncaster defence hacked it away, but only to the onrushing Luke O’Nien. His powerful drive swerved towards the top corner, but there was a bit too much swerve and it went high and wide.

Donny weren’t totally out of it but we were clearly on top at this point as Honeyman had a shot blocked, and both Power and Morgan had further chances. The second goal came from a corner, though only indirectly. Power played it short to McGeady, whose cross was headed away by the Rovers’ defence. It was like a bit of head tennis as at least two defenders headed it out of the box, Cattermole then headed it back towards halfway and a diving Honeyman stretched and headed it to Oviedo out wide. He in turn fed Max Power who sent a long diagonal ball towards the penalty spot. Donny keeper Marko Marosi came to punch it but in truth got nowhere near as his route to the ball was blocked by one of his own defenders and Jimmy Dunne who leapt highest of all to head it goalwards, where Charlie Wyke was on hand to ensure it found the back of the net.

This was another fine display from Wyke who is showing the qualities which made him our marquee signing of the summer. Not only is he strong with two good feet and has a decent touch, but he is also by all accounts a top bloke. If only he had a bit more pace.

All game the Lads had shown an intensity and a desire to win the ball and after another crunching tackle Lee Cattermole won the ball in the opposition half, fed Charlie Wyke who after playing a short pass to Aiden McGeady, who in turn found Oviedo on the overlap, continued his run into the box to get on the end of the Costa Rican’s cross, but his stooping header was gratefully clutched by the Slovakian keeper.  We were well on top yet almost conceded just before the half time whistle sounded.

Herbie Kane nutmegged Max Power then tried to run by him. Had Power simply stood his ground and Kane run into him, I might have felt aggrieved that the free kick was given, but as it was the ex Wigan man raised his arm to block the run, dragged Kane down and I couldn’t argue with the decision. The left footed shot from full back Danny Andrew was powerfully struck and rattled the foot of the post. A couple of inches to the right and it would have bounced harmlessly out of play for a goal kick. A couple of inches to the left and it would have gone in. As it was it came straight back off the woodwork and fortunately there was a player in a red and white shirt in the right place to hook it to safety as the whistle blew.

Doncaster needed to do something and half time brought a double substitution with forward Alfie May and attacking midfielder Allie Crawford, replacing Coppinger and Whiteman. My brother, watching the game on TV in the Three Horsehoes somewhere in Spain, texted me at full time to say he thought the second half had been a bit more scrappy and so it was, as Doncaster had more of the ball in our half of the pitch, but we defended resolutely and apart from the penalty shout I never really felt any apprehension, although I can never really settle when we are only two goals to the good.

We had in fact almost got a third five minutes into the half when the ball broke for Oviedo who ran at pace down the left wing, cut into the penalty area and shot for goal from distance. The ball seemed to take a slight deflection off a defender and just like at the end of the first half, the ball hit the post in more or less the same place but this time, went safely behind. A goal kick was given and no-one seemed to contest the decision so maybe a trip to the opticians is in order. 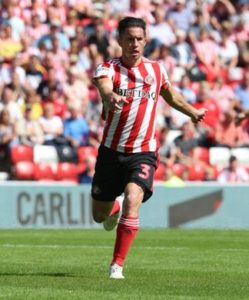 We had other chances, McGeady and Wyke might both have found the target, Wyke making space for himself after a lovely ball from the Irishman and producing a decent save from Marosi but it was Doncaster who arguably came closest as Dunne, misjudged a high ball and let May in behind him. Fortunately McLaughlin was alive to the situation and came rushing off his line to block the shot.

There was the penalty shout when Ozturk wrapped his arm around Andy Butler but Butler was leaning into Ozturk. Some refs would have given it – this one didn’t.

We had other opportunities. Wyke was sent clear in the first half but he wasn’t quite quick enough to get one on one with the keeper and eventually played it to McGeady who was closed down and late in the second half substitute Will Grigg had a decent shot saved. In truth this was a fairly comfortable win, though by no means a walk over. But once again the commitment was there from these players. Let’s hope that will stand us in good stead for the remaining four fixtures.

The one refereeing decision which didn’t go our way was at the Pirelli Stadium where Portsmouth’s 94th minute winner against Burton should have been ruled out on two counts. Those two points mean that we still have the same total as next Saturday’s opponents, although we have improved our goal difference.

Of course we still have Monday’s games to go but with a game in hand on Barnsley, Pompey’s visit could possibly be the defining moment of the promotion campaign but I suspect there will be a few more twists and turns to come before we head to Southend on Darth Vader’s birthday.

Next Post
Sixer’s Sevens: Doncaster caught out by Sunderland