Johnn McCormick writes: Today, we welcome the return of an excellent but brief series, twice. This is a repost because we appear once again to have been visited by the purveyor of Turkish massage sites. So if you’ve seen this before please accept our apologies. If you haven’t here’s another piece to enjoy.

Pete Sixsmith is a member of the 92 club and over the previous two seasons he has regaled us with tales of visits to grounds in Divisions two and three, and tales of visits by Division two and three clubs to Roker Park and the Stadium of Light. Then we ran out of new grounds and the series ended.

Until today. Lincoln City tootled up from non-League to League Two and League One in fine style, and now we’re off to play them.

But not for the first time. Over to Mr Sixsmith

It’s 1970. Ted Heath is Prime Minister having won a June election, defeating Harold Wilson to gain a comfortable majority. There are three television channels and colour tv has started – although not at the Sixsmith household, nor I suspect at M Salut’s.

I am 19 years old, have completed my first year at Sunderland College of Education and have negotiated a desperately dull field week in Leicestershire. I am working at Aycliffe Hospital as an orderly, alternating between the early shift (7-1) or the late one (1-9).

The beauty of the early shift means that I can get to a match on the evening. The rota for the second week in September has me on a rest day for Wednesday the 9th – which means that I can hopefully get to our Football League Cup tie at Sincil Bank.

How to get there? Possibly on John Tennick’s bus but that would mean a long walk home from Darlington. Good old British Rail- they ran night trains then- but still tricky getting back from Darlo.

Hitch hike? Ok going down, not so good getting back. 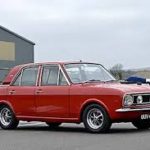 So, with some trepidation, I asked if I could borrow the family car. We had a Ford Cortina (unlike Billericay Dickie, there was no evidence of a seasoned-up hyena ever using the back seat) and I managed to persuade the parents to let me borrow it so I could tick off a new ground before I returned to college.

With petrol at 30p a gallon, it wasn’t an expensive trip and I must have set off quite early down the A1, circumnavigating the myriad of roundabouts between Scotch Corner and Wetherby and then into unknown territory along the A57 into Lindum. 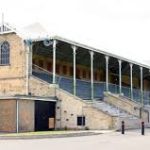 On the way in, I passed the old Lincoln racecourse, home of the Lincoln Handicap, once the biggest betting handicap in the racing calendar (it says ‘ere). The course had closed in 1964 but was still intact and the Grandstand is still there as it’s a listed building.

The city was fascinating. The cathedral dominates like nowhere else, even surpassing Durham and Ely. Lincolnshire is flat and the church, dedicated to St Hugh, stands tall and proud on its hill, a veritable Charlie Hurley of cathedrals. 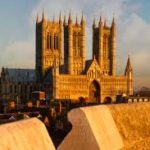 I paid a visit to it and looked at the copy of Magna Carta, glorying in the rights that it gave me as a free born Englishman – or more accurately the rights given to the French born and French speaking barons.

Surely Tony Hancock summed it up perfectly in Twelve Angry Men in his impassioned speech to his fellow jury members; “Does Magna Carta mean nothing to you? Did she die in vain? That brave Hungarian peasant girl who forced King John to sign the pledge at Runnymede and close the boozers at half past ten. Is all this to be forgotten?” 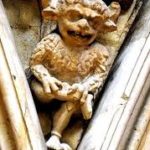 I looked for, and saw, the Lincoln Imp, tucked away in a corner of the roof. He was sent by Satan to cause havoc in the North of England and, having managed Newcastle United, organised the timetable for Northern Rail and manifesting himself as Geoffrey Boycott, he made it into the cathedral where he and a fellow imp threw tables and chairs around and kicked the Bishop up the a***, just as Father Ted did to Bishop Brennan. For his sins, he was turned into stone by an angel and made to dwell for ever as an effigy high up in the cathedral wall. Or he was carved by a mason.

The game was between a traditional Fourth Division club (although they had had a run in Division Two in the late 50s and early 60s) and a club who had just suffered a second relegation in their long and illustrious history. 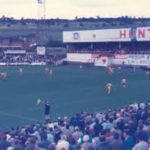 Sincil Bank was a patchwork ground of low stands and terracing typical of many lower league grounds at that time. Compared with the opulence of Roker Park, a ground that had staged a World Cup Quarter Final four years earlier, it was light years away. But, as we have found out this past 15 months, it ain’t the ground, it’s the players who run around on it that matters.

This was the mid-way stage of Alan Brown’s second stint at Roker. He had a poor record – he took us down in 1958 and in 1970. The board had enough confidence in him to trust him to get back up but gave him no money to spend.

The club’s youth team provided nine of the 12 players selected that day.

The Imps, managed by Bert Loxley, who sounds like a character out of The Archers, fielded this team:

And yes, it was the Graham Taylor who went on to manage Watford, Aston Villa, Wolves and England and yes, it was the Ray Harford who managed Luton Town, Wimbledon and Blackburn Rovers and who was regarded as one of the best coaches of his generation. Bert Loxley must have imparted something to them even if it was only how to win the marrow section at the Ambridge Flower and Produce Show.

I don’t remember a great deal about the game. Derek Trevis put them ahead in the seventh minute and Bobby Kerr levelled in the 20th. I think it may have been a shot turned in at the near post but I am happy to be corrected if this is wrong. The City winner came from one of the Imps’ all time favourite players, Percy Freeman, four minutes later.

Freeman was a highly effective centre forward from Redditch, who had played for a number of wonderfully named clubs: Headless Cross Youth, Redditch Wednesday Shopkeepers FC and West Bromwich Albion, where he made three Division One appearances. He was a roofer and builder in his spare time, fitting for a Percy.

I had a conversation with the estimable Keith Scott at a game last night and challenged him, a man of consummate knowledge, to name any other Percy’s who he had seen playing league football. Like me, he couldn’t so we could go to the grave satisfied that we knew of one Proud Percy.

Except he wasn’t. Instead of being named after the Dukes of Northumberland or cricketer Percy Fender, the Surrey and England all rounder, he was really Ronald Peter and Percy was a nickname.

And to think we wasted 20 minutes racking our feeble brains instead of watching Chester-le-Street Town and Durham City give the ball to each other.

Percy played 152 times for the Imps in two spells. He split them with a year at Reading where he fell out with the manager, which may well have been Charlie Hurley. That’ll learn him to score the winning goal against Sunderland!!

When he came back, Graham Taylor was the boss at Sincil and he flourished, smashing home loads of goals as City cruised to the Fourth Division title. Taylor left for Watford and Elton John; Ronald Peter retired and set up a roofing business. 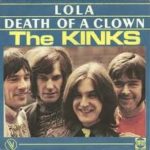 I drove back on a clear, moonlit night with the old racecourse stand illuminated by the moonbeams. The radio was tuned to Radio Luxembourg (“208, Your Station of the Stars”) and I may well have sung along to Lola by the Kinks, Big Yellow Taxi by the divine Joni Mitchell or Band of Gold by Freda Payne. But not “Sally” by Gerry Munro.

Forty-nine years on, we meet again, this time as equals. They have suffered since The Cowleys moved to Huddersfield and need to regain that momentum as soon as possible. We need to build on last week’s two wins and begin to put down a marker as autumn arrives with chilly mornings and darkening nights. I’m looking forward to a pleasant few hours in a splendid city and returning home along the A57 and thinking that we are All Right Now after gaining another three points.

If there is any copyright claim, not answered by  “fair comment”, on the images used in this post please let us know and we will acknowledge or remove as requested

6 thoughts on “The first time ever I saw your ground: Lincoln City and Sincil Bank”

Next Post
Lincoln City vs Sunderland: more points on the board please, Lads