A look at our week of derby-related wisdom and fun – and a marvellous 93rd minute climax to the Spain-France World cup qualifying game. There was more – catch Goldy’s analysis of the really big football story of the week (Danny Rose and Serbian racists) and more besides by going to the home page and pottering around … 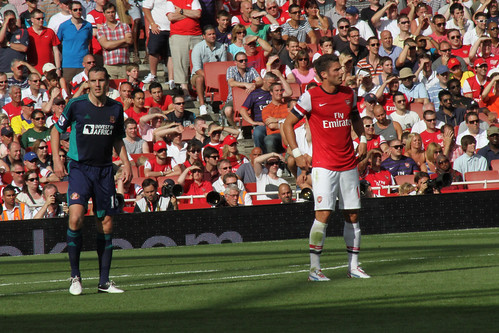 There are moments in football that stick in the memory a long time, even forever. They do not have to involve your own team, though it is all the better if they do.

So Sunderland supporters recall Gary Rowell’s completion of a hat-trick at St James’ Park, each of the four goals we slammed past Chelsea on an unforgettable first half, Larrson’s winner on Martin O’Neill’s managerial debut, Richardson’s free kick against Newcastle … and the final whistle at Wembley on May 5 1973.

Watching Spain v France live on French TV the other night, I saw another. Not entirely neutral – living partly in France, half-French family by marriage – I still didn’t attach too much importance to the outcome but wanted France to get an improbable result provided they earned it. Which they did, restricting Spain to a one-goal lead (thanks greatly to Hugo Lloris, with his penalty save and other heroics) at half time and carving out chances of their own.

“Allez, allez” yelled the TF1 commentator as Patrice Evra’s crucial block dispossessed the advancing Juanfran and France launched a last-ditch assault. The screen showed the minimum three minutes’ stoppage time to have passed. Could there still be a storming finish?

Expecting the whistle at any time, I saw the possibility as Sissoko powered forward and supplied the ever-menacing Ribery whose exemplary cross from the left was dispatched with strength, direction and aplomb by Olivier Giroud. If if was a riveting experience for someone hoping but not praying for an equaliser, it must have been a feast for one member of the TF1 panel in Madrid, Arsène Wenger OBE. Arsenal fans who have given Giroud and, by extension, Wenger so much grief should think again. See the clip in the footnote.


Sunday’s match is bigger, of course. And to mark the occasion, Salut! Sunderland has done its best to bring you some tip-top build-up coverage, which I now summarise (click highlighted text for full articles):

Some cynics are saying the renaming (or should that be de-naming) of the Sports Direct Arena is a ploy by Wonga to cast a cloud of sentimentality over the whole vexed question. Not everyone is fooled. The BBC reports that, for one, Ian Lavery – MP for Wansbeck and a Mags season-ticketholder – won’t be returning to the stadium, saying, ‘A city like Newcastle and the region should not have any ties with an organisation like Wonga. This business makes profits off the back of deprived people who are desperate and who are the most vulnerable in society.’

When the Magpies (we didn’t call them the Toon in those days did we?) played Sunderland at Roker Park, we would hire a bus and the 50 of us, both Newcastle and Sunderland supporters, would not only travel to the game together but we would also stand together in the Fulwell end, sporting our respective colours and cheering ourselves hoarse. On one occasion, a pal of mine even “borrowed” the school bell, which he painted red and white and rang enthusiastically throughout the match.

* John McCormick reinvents himself as Shakespeare for a foray, once more, unto the breach. Extract:

* Guess the Score. Still time to have a go at winning a Salut! Sunderland mug:

… occasional series, and it is open to supporters of both sides – and of neither – to enter.

* Mick (not Micky or Mickey) Gray’s tremendous set of answers, from a Newcastle-supporting perspective, to the Salut! Sunderland “Who are You?” questionnaire. Example:

Q: Many players have done well for both clubs, sometimes having to put aside personal allegiance. Do you have first-hand or received wisdom on any of them – Bracewell, Chopra, Clark, Given, Moncur, ‘Pop’ Robson, Shack, Venison, Waddle and Stan Anderson spring to my mind?

A: As an older fan – I saw all of that list play except Shack. Bobby Moncur has to be my favourite – great player and the last United skipper to lift a significant trophy. Bryan “Pop” Robson was a good player, as was Barry Venison. By the way, Robbie Elliott who played for both clubs is doing a 1,500 mile bike ride for cancer charities, starting this week in Lisbon and visiting all the cities where Sir Bobby Robson was a manager. If anyone would like to support this great cause just Google “bike for bobby”.

* And if you want even more, Monsieur Salut has also been kept busy at the ESPN site’s Sunderland pages:

1 … Great to win but should draws be made compulsory? Sample (quoting Keith Topping, writer and broadcaster (and Mag), from a previous season’s “Who are You?”:

I don’t really like derby matches. I have to be honest. I know the atmosphere is good … and, if you win it’s, like, the greatest day ever. But it really is a ‘so much at stake’ thing. I mean, I work in an office three-quarters full of Mackems. I know the true cost of defeat on a highly personal level. I tend to have the attitude of just wanting to get them out of the way, have two 1-1 draws and then get on the rest of the season.

2 … Derby cult heroes. A parade of Sunderland stars from Wear-Tyne and Tyne-Wear encounters dating back 104 years:

In case you don’t win Guess the Score, click here for the Martin O’Neill ‘Team of all Talents’ mug: £9.50, post-free for UK buyers, from the Salut! Sunderland Shop