The current spate of fixtures which are coming thick and fast means an increased workload for Pete Sixsmith so Malcolm Dawson relieves the pressure by borrowing his soapbox to give us his view of last night’s game at the Stadium of Light. 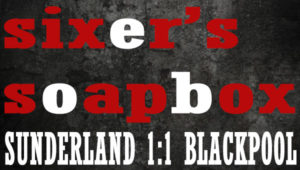 Still undefeated at home, only two games lost all season, the only team in the top four flights of English football to have scored in every game so far, comfortably in the play off positions and just off an automatic promotion spot with games in hand on the sides above us.

We were informed by Simon Pryde of BBC’s Total Sport before the game that this is Sunderland’s best ever start to a league campaign since 1963/64 which itself was the best ever start the club has made. So another point last night against a side which hadn’t lost since we beat them ourselves on New Year’s Day shouldn’t be seen as a poor result and yet it is. Two points dropped, rather than one point gained.

Last week I was up inside the Arctic Circle staying in the Norwegian city of Tromsö, a hotspot for those who wish to see the Aurora Borealis or Northern Lights. I travelled there in hope that I would get to see this natural phenomena, caused by the interaction of particles brought into the Earth’s magnetic field by the solar wind, but fully prepared to be disappointed which is rather like the majority of times I am when setting off for a Sunderland game – hoping for a good performance and a win but never taking anything for granted, knowing there are no guarantees in football.

On the way in I put my latest theory to Pete which is that since Aiden McGeady has been fit and an automatic starter, the team has been less fluid and therefore easier to defend against and that while one of his great attributes is his ball control and dribbling, the number of early crosses we get into the box has diminished and we seem much more laboured in our build up play. It’s hard to argue against his stats and leaving him out of the starting XI might be difficult to justify in those terms but maybe Jack Ross and the coaching staff might encourage him to look to play the ball into the box earlier, more often.

M Salut knows my reasons for not involving myself in social media and I can imagine that many of those tweeting and instagramming their disgust at last night’s performance would be the same as those who had been full of praise pre-match for the team selection. I was certainly happy with the line up. Blackpool tend to set up in a diamond formation so I saw the choice of O’Nien at full back, with Gooch ahead of him, with Watmore alongside Grigg as an opportunity to exploit space down the flanks and test the Seasiders’ defence with a bit of pace.

And we started off brightly. Within two minutes Watmore got behind the Blackpool defenders and forced Ben Heneghan into conceding a corner. Leadbitter whipped it in from the left and the Blackpool keeper looked a little unsure as he palmed it away at the near post for another corner. Leadbitter and McGeady combined, allowing the Fence Houses born Sunderland supporter to fire in a shot from outside the box, which this time Mark Howard held firmly. Two good opportunities in the first three minutes and encouraging signs that the Lads had come out full of attacking intent.

Then a long ball forward, saw Will Grigg put the Blackpool defence under pressure and he blocked the attempted clearance and almost got there before the keeper who did just enough to get the ball away to Watmore on the right wing, but he couldn’t capitalise. We had other efforts with Honeyman and Dunne both having decent shots and whilst Blackpool were impressing in patches it was the home side who looked the more likely to score in that first quarter of the game.

But opposition teams deserve a bit of credit when they play well and it wasn’t long before Jon McLaughlin proved his worth yet again getting down quickly at the far post to palm away a decent header from Harry Pritchard.

Immediately afterwards Will Grigg had a great chance to open his account when a swift passage of play down the right wing, started by Jimmy Dunne who had collected the ball from that save and involving McGeady and Honeyman, set Watmore away. As he bore down on the penalty area he played a neat pass to Grigg who took a touch and drove a firm left foot shot on target, but Howard made himself big and held on well. Credit to him for a decent stop.

It was all looking good but as is so often the case a near thing at one end was followed immediately by a goal at the other. From where I was it looked as if Baldwin was weak in his challenge on Armand Gnanduillet but a quick glance at the Sky Sports highlights confirm what Pete told me in the car after the match, that the man in orange had actually controlled the ball well, showed some strength to hold off and turn Baldwin before taking a couple of touches into space and rifling a shot from outside the box, across McLaughlin and into the bottom left corner. A cracking goal and whilst at the time I thought Baldwin was at fault I’ve revised my opinion. This was just a quality goal.

The home crowd however, reacted as they had when we went behind against Charlton on the first day of the season and roared the home side into a reaction. A minute after going behind we were on the attack again, O’Nien burst into the area and was clearly tripped. I thought so. Those around me thought so. O’Nien thought so, Jack Ross thought so but the referee and his assistant didn’t. It could so easily have been one all.

And two minutes later it almost was as a curling McGeady free kick just caught the wrong side of the post with the Blackpool keeper static on his line. Three inches to the right and it was in but as it was it went behind for a goal kick.

So we were in the game, but there were still too many occasions when we gave the ball away too easily. There were also, for my liking, too many times when the players bring the close control, once touch drill they do in the warm up into the game, when a quicker more direct flowing approach might pay dividends. That style of play almost got Will Grigg a goal and was more apparent earlier in the season.

As half time approached Blackpool were controlling the play well and certainly hadn’t come to let us have things all our own way. They might have gone into the break two goals to the good as the scorer Armand Gnanduillet , whose name sends my spell check into overdrive, missed the target with a header from a decent position. He will feel he should have done better.

The visitors also started the second period brightly and after seven minutes Jack Ross made his first tactical change replacing the ineffective Lynden Gooch with Charlie Wyke. It was noticable how much bigger the visitors were and this at least gave us a bit more of a physical presence. Things started to change and later the introduction of Tom Flanagan at left back for Reece James also evened things up size wise.

We once again began to get more of a hold on the game and I wondered if a repeat of that Charlton performance was on the cards. Watmore went close, Wyke went close and then on the hour mark, the manager decided it was time to put my theory to the test as Aiden McGeady was replaced by Lewis Morgan.

Then came the best chance of the game as Jack Baldwin played a quick long ball out of defence and found Will Grigg who got between the two centre backs, took the ball round the onrushing keeper and passed the ball into the side netting. Only inches wide but success and failure is often defined by the smallest of margins and this was just the wrong side of brilliant. Of course it will lead to many of the social media warriors branding Grigg as a waste of space and those websites that like to use terms such as slated, howler and shocking the opportunity to once again air those sensationalist headlines. It was a poor miss but at least it shows that he can find the space and hopefully when he is a bit more up to speed he will be more clinical.

From this point on Blackpool faded and once again we started to show the fight and determination that had stood us in good stead at the start of the season. Eventually we got the equaliser when Baldwin headed home from a corner with 15 minutes left and we finished the game the stronger of the two sides, though unlike in the Charlton game we weren’t able to finish the game with a winner.

It would have been harsh on the Seasiders who gave a good account of themselves, apart from the cynical time wasting that is.

I thought we just about deserved a point and I would have taken three but in truth we just weren’t clinical enough and made too many unforced errors. We need to retain the ball better and when we pressed the opposition in their own half late in the game we began to look more dominant. We did that earlier in the season and perhaps it is another thing the coaching team should think about in the latter stages of the season. 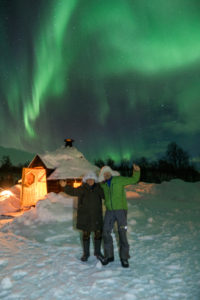 Last Tuesday I spent four hours on a boat which cruised the fjords in search of the aurora, but a thick cloud cover meant the lights were not showing, which was a disappointment but next day a trip out into the Norwegian countryside produced a great show and made the trip worthwhile. After last night’s disappointment, which still gained us a point don’t forget, let’s hope the team can respond on Friday and next Tuesday to put on a great display and give us all a bit of a psychological boost as we get into the crucial last third of the season.

Match highlights are available here at the SAFC website.

5 thoughts on “Sixer’s Substitute’s Soapbox: more of a damp squib than fireworks against Blackpool”