Now we’re getting into it, or at least Pete Sixsmith is. True, proper history. His journey through the football grounds of England brings us to memories of the era when Blackburn Rovers were admitted to the Football League instead of cup-winning-toff-defeating, working-class Blackburn Olympic, who subsequently folded, the first penalty kick was yet to be taken, and one of the founder members of the Football League and twice recent Champions were about to be upset by some upstarts from even further north. Pete wasn’t there, of course. That took another 80 years. Let’s read on and find out how his visit went:

John McCormick writes: Sunderland to Ipswich is not one of the longest journeys in the League. The straight line distance of just over 220 miles puts it in the mid-range category. However, you need to add at least another 50 miles – not all of them easy driving – if you go by road. Alternatively, you could spend a minimum of five hours on the train, with two changes.

When you consider this, and the number of times Sunderland and Ipswich have been in different leagues, you might be surprised to find how many times Pete Sixsmith has been there.

Then again, as it’s Pete Sixsmith, you might not. This is the latest in his twin series of reminiscences on first encounters with Sunderland’s opposing teams and their grounds …

The first post-war season saw Cardiff become champions of the Third Division (South) and they continued to climb as we began to struggle. They achieved Division One as the 195os began and they played us during most seasons of that decade, with a gap year when they were relegated 12 months before us.

Then came the Sixties and fortunes appeared to reverse, but only for a while, which brings us to the Seventies and Pete Sixsmith‘s  chance to remember some inauspicious meetings and one great day: 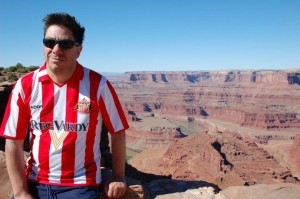 Rob Hutchison: far away at the time. Still travelling

Hutch is back. If not in person then via a very welcome proxy.

Olivia, Rob Hutchison‘s daughter, texted Colin post-game with a message and his one-word verdicts on our performances today.

One wordies are back! A long way to go to give up 2 points, and have the worst Balti pie I’ve ever had at a football match.

And now, the verdicts:

At the end Hull City had three of our former players on the pitch, so it had to happen. Nevertheless, we stopped the rot and James Vaughan broke his duck. So there was some sunshine against the KC band.

Pete Sixsmith’s immediate post-match text, in exactly seven words, however, suggests that it was merely a ray, and that the clouds have not yet cleared:

John McCormick writes:I couldn’t get the matchday centre, no matter what I tried (and try I did). Various websites were no help because there are no clubs outside the Premiership so I was reliant on Pete Sixsmith and his half time text: “0-0 Better than Saturday but not very inspiring”.

I found the BBC’s text service for the second half.  It sounded as if Pete had summarised the first half perfectly. Then came a second text “terrible error by Browning 0-1” One of our ex-players, of course

And that was that, as Pete’s final text, in seven words, no more, no less explained:

John McCormick writes: It’s the time of the week that all true Sunderland fans have come to fear. A chance to guess the score in a Sunderland AFC game.

What will you do? Be honest and write us off? Or keep the faith and go for a win?

What a choice to have to make.

John McCormick writes: Pete Sixsmith is a man of action. As soon as the deadline passed he sprang to work, with the result that this arrived early on Friday.  We held it back a day to give our readers time to reflect on the goings-on at this club of ours.

By now you’ll have had time to form your own opinion, as I have. I wouldn’t be surprised if our opinions change as the season progresses but it’s the here and now which matters, and here, now, is Pete’s analysis.

I find myself in broad agreement, and optimistic. How about you? Let’s have your opinions too.