Malcolm Dawson writes…….this was a competition that hardly anyone cared about six months ago and on Sunday no more than 9,655 of the 85,021 in attendance could have witnessed Sunderland and Portsmouth’s first foray into the 2018/19 Checkatrade Trophy. That figure includes the 69 Gillingham fans who made the trip along the south coast last September and the handful of those who came to Wearside to watch Stoke City U21s in action. I doubt many of those were there.

I said back then, that should we find ourselves at Wembley, the demand for tickets would be huge, that there would be thousands who didn’t think it worth the entrance fee equivalent to that of a Northern League fixture in the earlier rounds, who would be more than happy to spend hundreds on a jolly to the capital and that for one day at least, this piece of silverware would become the most significant trophy in the history of Sunderland AFC since 1973.

And why not? For a club and its fan base which have been through the bad times in recent years the opportunity to take home a cup (no matter how humble) is cause for celebration and the killing of the fatted calf or smoked tofu equivalent for the vegetarians and vegans in our ranks.

But Portsmouth too are a club that have been through the proverbial wringer in recent times having gone into administration three times, suffered points deductions, fallen from the top to bottom flights of English football with two former owners who are now spending time at Her Majesty’s Pleasure. This was as much their day as ours and it was fitting that the two best supported clubs in the EFL made this a day to remember.

And despite the fact that even on the train and Tube in the build up to the match, the majority of those in red and white or blue were saying they weren’t that bothered about the result, the post match reactions of both sets of supporters said otherwise. It was a good day out and I don’t care what anyone says, we didn’t lose but that doesn’t make the final result any less disappointing.

It was a good game, as Pete recorded from his soapbox. There has been plenty of discussion too about the manager’s tactics, but it is easy to forget that our opponents are just as desperate to win. Sometimes we need to give the opposition some credit for how they approached the game. To see things turn things around so dramatically in the second half inevitably brings the manager’s tactics and ability to respond to developing situations into question.

But we didn’t lose. Catt’s penalty was decent enough so credit the Pompey keeper for keeping it out. Meanwhile Jon McLaughlin had got a hand to their first but it was just not quite enough of one to prevent the ball crossing the line. On such fine margins are penalty shoot outs sometimes decided and this time all 10 were on target.

I chose to spend the weekend with some friends who live just outside Nottingham and took the train into London on Sunday morning via Grantham where there were plenty of supporters of both teams on the platform. I chatted to a few Pompey fans whilst waiting for my connection and they were of the opinion that promotion was the main objective. I’m not sure I believed them when they said they weren’t too bothered about winning at Wembley but we all agreed the main thing was to have a good day. It was the same on the Tube from Euston. I had a long conversation with three generations of a family from Luton, though originally from Portsmouth and unusually in my experience, a young girl and her boyfriend, both Londoners and on their way to her mum’s with some flowers for Mothering Sunday, also joined in. Turns out her mother is a Scouser and a Liverpool fan so she had been brought up not thinking there is anything wrong with striking up a conversation with complete strangers.

I had met up with some of the Heart of England Branch in a bar near Euston Square where the beer was almost as expensive as it had been on my recent visit to Tromso. I was also to meet up with them after the game but thereby hangs a tale.

My seat fortunately was in the front row of the second tier so I had a great view and didn’t have to worry about the fact that the majority of Sunderland supporters seem to want to stand at away games. Much as I am prepared to defend their view that supporters should be able to stand if they want, I do wish others would appreciate that there are plenty of us who find standing for an entire game painful and ultimately impossible. It’s not like standing up helps you see any better and if you’re not particularly tall can mean you get to see very little. All seater stadiums! One more thing for me to blame on Maggie Thatcher and the hard core of professional politicians who have little understanding of what the ordinary man and woman experience day to day. Don’t get me started!

Wembley Way was packed but despite the abundance of food outlets I didn’t see a single tray of cheesy chips. I paused to admire the Rugby League legends statue as I wandered around to my entrance, eventually finding my seat. No surprise that HoE stalwart Terry was in the row behind. Accrington, Walsall and other games where we often get tickets through the branch I understand but Wembley when I used the choose-a-seat-for-me option! I also bumped into the lad who sits three seats away from me at the SoL wandering around the concourse in search of chilli nachos at half time!

I was in my seat in plenty of time to see the lasses of Sunderland come from behind to beat those of Mangotsfield representing Bristol Rovers and comment on the fact that the pink seats of Wembley were unlikely to be replaced by an army of Spurs supporters. 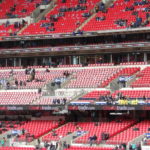 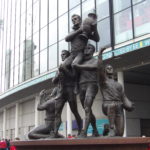 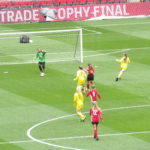 In the post match drift back to the Tube station there seemed to be a good mix of us and them and it was all good natured where I was at least. Considering the numbers involved the organisation was good and whilst we were kept waiting at various points on the walk while the station cleared it didn’t really take that long to get back to Kings Cross.

Before the semi final at Bristol Rovers, Sobsy had told me of a pub, about six minutes walk from the Euston Road exit of Kings Cross and so the HoE had arranged to meet there. I had looked it up on the map and reckoned I could find my own way there nee bother and set off. Crossing the road I prepared to continue along Judd Street when the voice from the ether, which was Google Maps said “continue for 100 yards on Euston Road, then turn left”. Technology eh! Instead of ignoring it I decided it knew best so that’s what I did. This dismembered voice then continued to direct me right, left, straight on for 400 yards etc. until it took me to a point when I knew I wouldn’t be able to find the pub unaided. Another couple of miles and 50 minutes later I twigged that for some reason it had defaulted to car driving mode and the directions it was giving me were taking road works and one way systems into account. Having arrived at Kings Cross at 6.30 my eight minute walk had taken best part of an hour, half my mates had left to get a train and I was pushing it to get a pint in before mine left. I managed though. There were plenty of Sun’lan fans in there too!

I followed my nose on the walk back to the station. It took me 8 minutes. The trains were on time and I even managed a pint in Bingham though I was too late for the quiz. Whilst there was clearly a huge disappointment that we had nothing to show in terms of a trophy, I was left to reflect on the day and the fact that not only had I been able to walk and stand for so long on Wembley Way but I had taken a two mile detour trying to find a pub with a framed vintage Sunderland shirt and spent time waiting for trains, all without the aid of a walking stick and not too much pain. Considering that only two years ago I struggled to get up and down the stairs in my house, the Post Office around the corner was off limits and I needed a half hour sit down after I’d put my bins out, I’d call that a victory!

8 thoughts on “View from the NW Corner: Why Checkatrade defeat was a victory for me!”

Next Post
The Accrington Stanley Guess the Score: now for the bigger prize