Another attempt to capture the flavour of Salut! Sunderland‘s week in one Saturday morning posting …

To say that Jake, our electronic friend originally from Sunderland but now languishing in Spanish exile, has brought a breath of fresh air to Salut! Sunderland would be an understatement.

Every image in this article, with the exception of my signature and the photo of Clemency Burton-Hill, has come from his amateur graphics skills, often adapting existing work. Rightly or wrongly, I attach high importance to the use of illustration on the site, especially with the new design, and it is a relief not to have make the long and often fruitless trawls through Flickr, or fire off requests for permission to reproduce that often go unanswered.

I hope to see more and more of Jake’s offerings on these pages and, when we can get off our backsides, the trifling bits of merchandise we try to flog you.

The first image, based on Soviet poster art, will accompany each “Who are You?” interview. It made its debut with the long and fascinating set of answers from the unfairly multi-talented Clemency. I haven’t time to list all she does all over again: just go to the interview at this link

In short, Clemency misses Highbury, and not just because she now lives in NYC, loves Arsène but feels his time has come, likes Sunderland and thinks football cheats are like a bunch of five-year-olds.

Her route to Salut! Sunderland was interesting. Nic Wiseman, co-editor of the 1990s SAFC fanzine It’s The Hope I Can’t Stand (described by one of our Arsenal guests of last season, Tom Watt, as the best fanzine title he has seen), is a fan of Clemency’s classical music radio programme. At any rate that is his excuse for following her on Twitter.

On the day we beat Manchester City, he spotted one or two happy tweets from her and asked me whether I was aware of any Sunderland allegiance on her part. I checked her website and found she was a committed Gooner and shot off a tweet of my own to her asking if she would do the honours for today’s match.

These requests are rarely successful. A Spurs fansite editor once told me never to expect any of the celeb supporters listed on his site to do anything for free.

Piers Morgan half-promised to do it last season but got very cross when I reminded him of this. But sometimes, people – however grand, however busy – are generous with their time and this proved the case with Clemency as it has in the past with a string of writers, broadcasters, editors, film and TV stars, players and ex-players, churchmen and the rest. Salut! Sunderland is grateful to one and all. And to Nic for putting the thought into my mind.

And there’s still time -up to 3pm – to predi’s the score of today’s match and maybe win a Salut! Snderland mug. Go to this post: https://safc.blog/2012/02/sunderland-v-arsenal-make-mugs-of-us-with-the-score/

Otherwise, you pretty well know what has been happening. We kept on winning, 1-0 at Stoke after which the Huth affair dominated the comments – see in particular the article recording the failure of Stoke’s appeal against his dismissal – and 2-1 at Boro to earn the right to play Arsenal two weeks running. See Pete Sixsmith’s admirable analysis at this link. 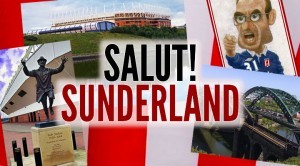 Before the match, I offered some thoughts on North-eastern rivalries and Iain Lazenby gave marvellous answers in the “Who are You?” questionnaire.

But mostly, this was an excuse to show off a few of Jake’s graphics. Ha’way Jake, and Ha’way the Lads versus Arsenal.

1 thought on “Salut! Sunderland’s Week: Stoke, Middlesbrough and a star Arsenal ‘Who are You?’”

Next Post
Sunderland v Arsenal: make mugs of us with the score