In the fourth and final part of his Hong Kong Diary, Paul Goldsmith peers  back through the miasma of alcohol and working girls to bring us up to date on the adventures of a Sunderland fan in that perfumed harbour which is Hong Kong.

First of all, I’d like to apologise for the delay in this final instalment, but as you can imagine it’s been fairly hectic and difficult to get on-line. Once again, the night before the match became a drunken haze. Tom, Lynne, Robbie and Carl decided, by all accounts, that during the day they would go and see the impressive big Buddha situated just outside town, leaving me to my own devices.
I love nothing better than wandering around Asian cities taking in the sounds, sights and smells of a truly amazing continent and in doing so I strayed a little off the beaten track and watched traditional Chinese butchers killing, plucking and cutting up live chickens amongst other things. Try that on Chester Road and I reckon health and safety would go crazy. After marvelling at the vast array of colourful spices, chillies and such, I stumbled upon an oasis of tranquility – a local park, where I sat amongst the locals drinking a litre bottle of Skol. I was soon joined by two Filipina lasses, who took me to a cheap restaurant for local food which was very much appreciated, as funds were running low by now.
After a lovely meal I headed off to be with my own people – well nearly my own – as the Devil’s Advocate
was empty and I ended up joining the City fans in Carnegies opposite, to await the red and white hordes. This, surprisingly, was the rendezvous for our transport to the supporters’ night which had been laid on by the club. A massive thanks must go out to Darren Harrison of HKSAFCSA for liaising with local restaurants and to the club themselves for making this possible. Unfortunately, no players or management turned up but Margaret and Chris did and we were very grateful for it. They thanked us for our loyal support before Del took the microphone to lead us in such ditties as from the banks of the River Wear etc. 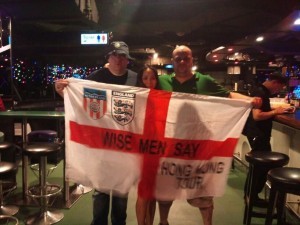 After the event we headed up to Wanchai where we sang and drank again. Then after a period of time, accompanied by Sunderland and City fans, we visited some more specialist bars where we bewildered the working girls being as we were, more interested in drink and song than their services. By the end of the evening the ladies knew all the words of our songs. It was a late night and there were plenty of fuzzy heads the next day, which was of course match day. As we met at Devils, me resplendent in my new light blue tracksuit and hotel slippers, I decided to climb up the bamboo scaffolding to tie up a bed sheet with FTM written on. As City and SAFC fans took pics of me, one lad enquired whether you call 999 out here too. Tom played a blinder and sourced me tickets for the game so we headed down to the stadium where it became apparent the locals were supporting us.

Catch the three previous instalments of Paul Goldsmith’s entertaining account of days and nights in Hong Kong at this link: https://safc.blog/category/salut-guests/

Unfortunately it was not to be. I won’t go into too many match details, as you all saw it but I will say I’m excited and confident about this season, as are all the lads out here. We appear to know what we’re doing when we have the ball and hopefully we won’t have a season sitting watching the opposition teams try and break us down. We may even get out of our seats more than twice in one game. Here’s hoping! 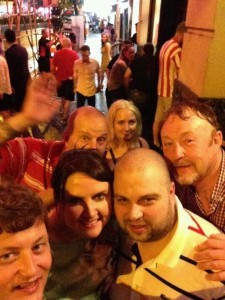 Thanks for reading this. Since first watching England 1997 in Rome I have hundreds of stories. If you see me buy me a pint and say hello we can share some. It’s been an amazing trip, with amazing people. Will I make it to Denmark next week? I doubt it. Would I swap all this for two weeks in Benidorm – NEVER!!
HA’WAY THE LADS

6 thoughts on “Hong Kong diary: (4) singing in the rain, in the bars and in the street”