Keith Hoggins* laughs gently at Monsieur Salut’s football club, musical tastes and sport of choice as participant (scroll down for the spoof front page he designed to mark a career change** a few years ago). And M Salut mocks his former colleague’s glory-seeking support of Manchester United. That’s the authorised version; we now learn Keith started following MUFC just “as they were getting crap” and also that he not only has a soft spot for Sunderland but shares none of his fellow fans’ pantomime outrage at the Poznan prank. He sees us staying up – I wonder how many of us do – without even having to record a first home point as early as Saturday evening …

What is it about Manchester United? Why do millions, maybe a billion or more, without the least connection with Manchester or even the UK consider themselves supporters – isn’t it a bit like having a fondness for Coco-Cola or Levi jeans but not really knowing anything about their history?

United had a worldwide reputation and a glorious footballing tradition long before the sport became fashionable following the post-Taylor revolution (for the better) and the infusion of television money (not always for the better). The extraordinary success of the Ferguson era coincided with a hard-headed recognition by the club of global commercial possibilities. I’m sorry if that sounds tacky, but it’s a fact. United simply got there first.

Is it embarrassing to have ‘fans’ who probably think that Best, Law & Charlton is a firm of solicitors? Absolutely. Should we curse people on the other side of the world who wear a United shirt and take pleasure in their success? Not really. It’s the world today. Get over it.

Had to get that ProperClubism out of the way. More important to you, is David Moyes up to the task, impossible as it may be to follow Sir Alex?

What Ferguson did will not be repeated by anyone, anywhere in my lifetime. This was always going to be a difficult season for United, with or without him. For me, the 2012-13 title success was an unexpected bonus – due to a combination of the Ferguson factor, Manchester City resting on their laurels and the Chelsea managerial merry-go-round.

Despite the terrible start to the season (odd how definitions of ‘terrible’ vary – ed)and the decidedly average summer transfer activity, I believe that Moyes is the right man for the job.

But he needs to get a reaction from the team after the recent hiding at the Etihad. It wasn’t the fact that they got beaten, but the manner of the defeat – City were hungrier and it showed.

Did you resent the Poznan thing at Sunderland the season before last – or settle for senses of humour and proportion?

Not in the least. I thought it rather odd that Sunderland fans reserved their biggest cheer of the day for the fact that someone else had won the league, but the Poznan thing was funny, although you’ll excuse me for not thinking so on the day. Mockery, with wit, is good.

So what is your own history of supporting MUFC and how active a fan have you been able to be, given work and geographical constraints?

Confession: I am one of those ghastly fans with no Manchester connection. Once upon a time, when footballs had laces, I truly did support my local team: the now defunct Sheppey United, who played in red and white stripes in the old semi-pro Metropolitan League. Botany Road, now a housing estate but then the home of the Islanders, was a couple of hundred yards from where I lived. But, of course, every wannabe in the playground had a favourite First Division side. How could you not like a team that had Denis Law in it?

I played a lot of Saturday and Sunday football in my younger days – even a few times for Sheppey – so getting to watch matches was not easy. I also ended up spending a lot of Saturdays reporting on them for the local newspaper. In my schooldays, when I had saved enough paper round money, I would occasionally go to Stamford Bridge in the greyhound track era and saw United now and then when they were playing in London. With less than perfect timing, I homed in on United as they were getting crap.

Attendance became much more regular when my son got a little older and my wallet a little fatter. We would make the trip to Old Trafford once a month. Driving more than 500 miles in a day to watch them lose 1-0 to Wimbledon takes a certain dedication and lack of common sense. Nowadays, age, geography, the price of travel and a brutal weekend work rota have curtailed my opportunities further. But I still keep the faith.

Do you have any good, bad, amusing memories of past encounters, home or away, between our clubs?

1996. Cantona. Chip. A player from a different footballing planet. 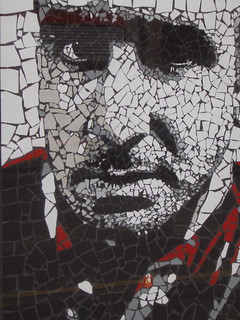 From a mighty list, who are the greatest players you’ve seen – or wish you’d seen – in United colours and who should have been allowed nowhere near them?

I loved the Docherty up-and-at-’em team of the Seventies with the Greenhoffs and Steve Coppell. Whiteside and Robson were great to watch. I have seen all the greats of the modern era. I could watch Paul Scholes play all day. He was, by a country mile, the best player of his generation and, to my mind, the best of the Ferguson era.
Bobby Charlton, who I did watch, often said that Duncan Edwards was the greatest player he had seen. I wish I had too. I wouldn’t have minded seeing Allenby Chilton, centre half in Busby’s first post-war team. I have no idea if he was any good, but what a name … ripped from the pages of a John Buchan novel.

The worst? There are more than you think, even from the Ferguson era. Try Massimo Taibi, or Ralph Milne, or Kleberson, or Cantona’s mate William Prunier, or Eric Djemba Djemba, so bad they named him twice.

Evans, Yorke, Cole, Saha, Welbeck, Bardsley, (Wes) Brown, O’Shea, Bellion (!), Bruce, Sbragia and heaven knows who else I’ve forgotten. Which players/staff with links between our two clubs has/have a place/s in your memory/affection?

Good grief, I had forgotten David Bellion. It must be a case of repressed memory syndrome. Feel free to cut and paste his name into the last paragraph of the answer above.

My favourite on that list is Bruce. I was at Old Trafford when he headed those two goals against Sheffield Wednesday on the day 1993 that Fergietime was invented. It was a scandal that he was never capped by England. I also think that I once played against him – he began his pro career at Gillingham and was a youth team player when they brought a side to Botany Road for a pre-season friendly. I somehow doubt that he remembers me.

Guess the SAFC vs MUFC score – you won’t win a million but you might win a mug: https://safc.blog/2013/10/safc-vs-manchester-united-guess-the-score-a-brand-of-gloryseeking/

Were you surprised to see the Di Canio gamble end in tears?

No. He was the man for whom the phrase loose cannon was invented.

Your own highs and lows of supporting United?

Highs: So many. Preventing Liverpool winning the Treble in 1977, particularly with 1999 hindsight, was a wondrous thing. Being at Wembley for the 1985 and 1996 FA Cup victories wasn’t bad either. The aforementioned Bruce double is up there.

Lows: Denis Law backheeling one in for City in the relegation season of 1973-4; the death of George Best.

This season’s top four in order, and the three clubs going down?

1 Man City, 2 Chelsea, 3 United, 4 Take any one from Arsenal, Spurs and Liverpool. Going down: Crystal Palace, Cardiff and Norwich.

If Man U were not top in your last answer, and Sunderland nowhere in the second part, why are you pessimistic and where will my club finish?

As I said, United overachieved last season. As I write this, they are 12th. I had hair the last time they were that low. City and Chelsea have better squads. I think Sunderland will scrape by one or two places above the drop zone, but they need to get their act together and quick.

What inspires you most about modern football and what appals?

Club vs country: which comes first for you and why?

Club. The hype around the England team is depressing.

I have been a United fan for more than 40 years. I am a newspaper sub-editor, which, for the uninitiated, means I butcher and introduce errors into copy written by great reporters such as Colin Randall. In my precious few spare hours, I watch football from park to Premier level, spend an inordinate amount of time in long grass looking for my golf ball, captain the England smoking team and get taken for long walks on the beach by Archie the Basset hound. Don’t panic about the accompanying picture. It’s not the latest United reject signed by Sunderland – it’s me having pulled on a pair of boots for the first (and last) time in 20 years to play for my brother’s veterans team. He captioned it “Der Kaiser”. You may laugh at the mockery, but I see similarities … we both abdicated after crushing defeats.

14 thoughts on “The Manchester United Who are You?: ‘good grief, I’d forgotten David Bellion’”