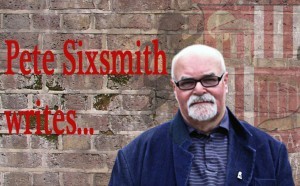 John McCormick writes: Pete Sixsmith sent me a text a few games ago suggesting we were Championship bound. I wasn’t so sure then. Now, I’m not even bothering to run the numbers to predict the final table. Why not? Well, I wasn’t there yesterday but Pete was, so why not find out from his post-match report? …

I am sitting writing this as Hull City are cruising to their first ever FA Cup Final, a Hull City side that has beaten us three times, is managed by Steve Bruce and numbers Ahmed Elmohamady and David Meyler among its players. It adds to my frustration and anger after what has probably been the most disappointing season in my 50 years as a Sunderland supporter.

There is little point in hoping for the myriad miracles that are needed to prevent the ninth relegation that Monsieur Salut and I have witnessed. We were both too young to remember 1958, (although George who sits stoically in front of me was taken to his first game in that one).  I have stood or sat through every one since.

To avoid relegation potion No.9, we need the following things to happen;

Although there was an improved performance against Everton, we never really convinced and it was exactly the kind of game that a half decent side would win without ever worrying about losing it. On this performance, that’s what Everton are and they knew that there would be harder and more important games to come. I am sure that Roberto Martinez would be confident that all he had to do was to prevent us from scoring and a goal would come from somewhere – and if his players couldn’t manage it, one of ours would be sure to assist.

It was a better balanced side and all of those involved gave their best but, as we now realise, their best is either in the past, the future or is not  good enough. The four at the back was much safer, the midfield grafted away and Wickham looked promising up front, but this looked a desperately poor Premier League side and one that was as certain as certain could be to be relegated.

Poyet has cut a forlorn figure this week. He has insisted that the players feel happier with the triple centre half fiasco (presumably the only one he spoke to was the hapless Vergini) and that Bridcutt and Cattermole had played well at Spurs. He may want to explain why Cattermole was taken off at White Hart Lane and why Bridcutt wasn’t even in the squad on Saturday [Benno said his wife was in labour – ed].

Back came Colback and he did well enough but he never strikes me as a player who can create. Put him in the Cattermole/Bridcutt role and he will do a job; ask him to prise open a tight midfield and defence like Everton’s and you are posing the wrong question to the wrong man. I hope that wherever he goes next season (Hull, Newcastle, West Ham) he finds a manager who can appreciate his abilities and use him properly.

The creaking combination of Brown and O’Shea showed heart and a genuine commitment as befits men who have won medals in every conceivable competition but who do not want a relegation on their record or a season in the Championship before their contracts run out. Brown was unfortunate with the touch that sent Deulofeu’s cross past Mannone but a younger, hungrier player might have been there a split second earlier.

The cross came from the liveliest player on the field and one who benefited from only having to beat his full back as we appeared to have very little cover down that flank. Alonso has some good touches and is a decent player but when a winger runs at him he often seems ponderous, a kind of Len Ashurst type.

But the main problem is midfield and up front where we never seem to seize the initiative and dictate a game – probably because we cannot. Ki has done very little recently and looks like a man with Brazil on his mind. There were some decent touches and the occasional shimmy but nothing that ever looked like getting the ball behind Stones and Distin. Cattermole did well and avoided a booking from the amazingly laid back Lee Probert but his strengths are in winning the ball and then moving it on and not in threading the ball through to a rampaging forward.

Not that we have any of these. Connor Wickham did well and, on the evidence of this game and this game only, looked far superior to a very disappointing Romelu Lukaku. He deserves a run in the team and if he does well, he will either line himself up for a move to a club that knows how to develop young English players or he will start scoring goals in the Championship for us.

We trudged away from the ground knowing that the other results had all but condemned us to what we feared in August and had virtually discounted on that memorable day on Tyneside in February. Since then we have failed to win a game and have been written off by the “experts” who proclaimed us as safe as the Co-op Bank ten weeks ago.

On Wednesday we visit Eastlands to face a Manchester City side who no longer have their title challenge in their own hands. It could go either way – they get back on track by whopping us or their depression is so great that they lose concentration and we sneak a win and the hope starts up all over again. I have a ticket for the game which I am unsure what to do with.

Maybe our loyal band of readers could help me with this one and, a la Michael Miles (ask yer dad) could say whether I should take the money or watch City hammer another nail in our box.

In the meantime we have an FA Cup Final between Arsenal and Hull City. Shall I be watching it? Chances unlikely.

Next Post
Poyetry in motion: Everton weren’t mint but they still stuck it on us