Vincent Tan has made something of a name for himself in South Wales, getting rid of a popular manager and showing contempt for such outdated notions as football tradition and the wishes of lifelong fans. Now he stands between us and the h*** of salvation. Ha’way the Lads and Ha’way Pete Sixsmith – see something on Sunday afternoon to make you and all other SAFC fans smile …

“April is the cruellest month,” the poet Eliot (TS not Shaun) said in The Waste Land, his cheerful ditty about Middlesbrough.

Far too often in the past he has been right as Sunderland have slid into the bottom three or slipped out of the top three so it is a month when I usually get the wobbles – and Sixsmith with the wobbles far outwobbles the earthquakes that have hit Rutland recently.

So far, it has been a mixed month: defeats against West Ham, Spurs and Everton were seen by many, including this jelly-like scribe, as being terminal, although the Everton performance gave us a smidgeon of hope. Then, at Eastlands, a bravura performance gave us hope to cling on to, followed by the epic win at Stamford Bridge, a victory as great as that of Harold Godwinson over Earl Tostig and Harald Hardrada at the Yorkshire equivalent on the 25th September 1066. Alas, Godwinson managed to lose the next fixture at Hastings despite keeping an eye out for French arrows.

No Hastings for us. Instead we welcome Cardiff City and their fans who will have been on the road since daft o’clock in order to assuage the thirst of the Sky viewers who demand three consecutive games on a Sunday. Lord knows, Sunderland fans will have to be up early enough to get to the Stadium for 12 – but when did a TV company ever care about the travelling support? Answers on a postcard please………………

Three points would take us above the Red Dragons/Bluebirds and, should Hull City, Swansea City, West Ham United and Manchester United all do the business on Saturday, take us out of the bottom three and breathing down the necks of an increasingly nervous West Brom and Aston Villa. Safety will be within touching distance.

One point or none would keep us in the relegation zone and, if Fulham, Aston Villa, West Brom and Norwich City all do their business on Saturday afternoon, we will be in deep trouble, the bubble of euphoria once again pricked.

There is going to be a large crowd there on Sunday. It will be far in excess of what any of our rivals at the bottom could attract to their grounds if they were in a similar position. It will be a crowd that will, in all probability, be anticipating a home win and hopefully it will do its best to encourage the team and put the fear of God up the Cardiff players.

When I first started going to Roker, the Roar would often help the team to overcome difficult starts and raise the performance of the team. In 1961, Spurs got away with a draw in a 5th Round FA Cup tie, with Danny Blanchflower saying that he had never heard a noise like the one that came from 61,000 Sunderland throats when Willie McPheat bundled in the equaliser.

Twelve years later, after Rodney Marsh, Francis Lee and Colin Bell had been despatched in a Fifth Round replay, legend has it that a Fleet Street journalist turned up at Roker the next morning looking for the extra amplification that had made the crowd so loud the previous night.

Since the SoL opened, the noisiest and most uplifting crowd we have had was when we had to overturn Sheffield United’s lead in that playoff semi-final. I was sat in the Premier Concourse and I thought my ears were going to bleed as Kevin Phillips put us ahead on aggregate and as French trawler man Lionel Perez pulled off an astonishing save at the death to take us to Wembley.

Since then there have been sporadic outbursts of passion – Burnley under Keane, beating the Mags twice – but too often, the crowd has been withdrawn and, at times, downright sullen. I seem to remember the players being booed off by some sections after demolishing Plymouth 5-1 under Mick McCarthy. 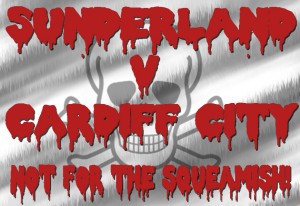 Catch the rest of the big match buildup by going to the home page – https://safc.blog – and browsing

On Sunday, there can be no room for moaners, particularly if the game is a tight one. Every Sunderland fan can play their part by encouraging players and not groaning when a pass is misplaced or an opportunity is spurned. I have my moments, as Gareth of the consistently excellent podcast could tell you, but I resolve to do nothing but encourage and spur the team on to what could be the game that saves our season.

I imagine that Poyet will keep the same team that won at Chelsea. The players did well and know what is expected from them. None of them want to be relegated – those who stay will earn 40 per cent less next season. It is very tempting to restore Bardsley to right back and leave Vergini out, but I would leave well alone; the Argentine has looked comfortable in that position and he can move across if needed.

The last two games have been played without any expectation on the team’s shoulders. Even after the point in Manchester, nobody expected a win at Chelsea. I listened to the first 11 minutes on the radio while watching Birtley Town play Chester-le-Street and turned it off when Eto’o scored.

News of the equaliser came via the BBC Sport website on the smart phone and the winner from the estimable Keith Scott who was stood twenty yards from me at Birtley. The rest of the game was spent walking around the ground not daring to look at the score.

This time, expectations are high and that is when we can be let down. In 1979, we demolished Sheffield United 6-2 to go top of Division Two with two games left. Four days later, a Cardiff City side, camped in mid-table, came to Roker. Win and we were up. 36,000 present, in anticipation of another sparkling (and winning) display. We lost 2-1 and even Ronnie Moore scored for the then very much Bluebirds. Wonder if he will have a bet on this game.

Finally, an omen, although I am not sure that many of us will like it.

Sunderland got the better of Newcastle yesterday (yes, we like that bit) at Barclays Bank plc AGM. Newcastle owner and all round popular Tyneside folk hero, Mike Ashley, attended as a shareholder and, presumably, voted against the obscene bonuses that the board gifted to the talented bankers who had overseen a profit collapse of 32 pr cent and had seen the company close its Shildon branch.

Up stepped Sir John Sunderland from the board to defend what we might regard as the indefensible. The motion was defeated and once again Ashley was beaten by Sunderland. And you can’t get much more tenuous than that!!