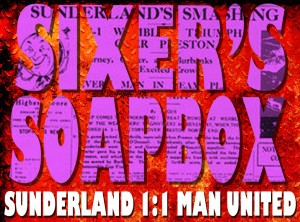 Malcolm Dawson writes…..Fifty years ago, Peter Sixsmith, M Salut and myself were all at the opening fixture of the 1964/5 season. I wasn’t to meet either of them until many years later, but here the three of us are half a century on, still hoping that the first home game of a new season will bring some long awaited success. Our golden anniversary coincides with Match of the Day’s own 50 year celebrations and it came as a bit of a shock to discover that in all that time only 11 sides have won the Football League/Premier League title. Sunday’s opponents were to finish top of the pile for the sixth time in 1964/5 but it is doubtful that they will do it for the twenty first time this campaign. At least Pete doesn’t think so based on what he saw at the Stadium of Light. Here is how he saw things.

I may have mentioned that it is 50 years since season tickets were purchased by the owner and general factotum of Salut Sunderland.

It coincided with the closure of the railway line between Shildon and Durham (via Bishop Auckland, Hunwick and Brandon) and Durham and Sunderland (via Leamside, Fencehouses and Pallion). It therefore fell upon M Salut, as the senior partner and as someone with contacts in the world of the CIU, to find alternative ways of getting to Roker Park.

So it was, that on the day of the Leicester City game 50 years and two days ago, we stood on the corner at the King Willie (now boarded up and up for sale) waiting for the bus that would take us to the promised land. It was run by Billy Reilly from Close House and Kenny Snowdon from Jasmine Avenue, a man with enough chest hair to stuff a mattress. Legendary figures like Jasper Jones followed us on to the Central Coaches “luxury coach” that took us away from the dull provinciality of Shildon to the bright lights, big city atmosphere of Sunderland.

And so it was to celebrate that 50th anniversary that I left the Mazda 3 in the garage and walked up to the car park behind The Royal George to travel to the Manchester United game on Russell Henderson’s 2014 version of Billy Reilly’s dream wagon. No crates of beer or men puffing cigarettes on this one, although beer had been taken by a good number of the passengers that the coach picked up in Newton Aycliffe, Chilton and Ferryhill.

We arrived in Sunderland just as Cerys Matthews was winding up her excellent 6Music show and I trotted off to the National Glass Centre for a filling Sunday lunch – a long way from the pie and Bovril that I probably consumed in 1964. The crowd on that day was 45,645 and there were 2,408 fewer for this one. Leicester may have brought a few up, but if they did I don’t remember seeing any and they would not have been seated together as the Manchester (I use the term loosely) fans were.

Old acquaintances were renewed in the concourse and in the seats. Hands were shaken, inquiries were made about summer holidays and there was a cautious optimism about the new season ahead of us. In the East Stand, there is a general consensus that Poyet does things right – a feeling that was considerably different from that of 12 months ago.

We started well and should have been ahead. A great run and pass by Will Buckley set up Connor Wickham who should have scored but he scuffed his shot. United went down the other end and scored with their first attack. Both incidents involved new players. Buckley made an excellent start and justified the words of the Brighton Argus who described him as a player with the potential to do well at the top level albeit after having wasted a season at Albion.

He looked quick and sharp and was prepared to take on his full back on both the inside and the outside. Johnson’s unwellness gave him an opportunity and he seized it with both feet. He played a part in the equaliser as well, of which more later.

The United opener came after a good run by Valencia (the player, not the La Liga team) in which van Aanholt lost his man yet again. His cross was a good one and was bundled over the line by Mata, arriving there a split second before Seb Larsson. The young Dutchman has now been responsible for two goals and needs to tighten up his play. He came back well though and made some excellent runs. He could be a good signing.

In the past, United would have turned the screw and made sure that they rattled in a second PDQ. But that was then and this is now and this is a very ordinary team, more of a Villa or a Hull rather than a City or a Chelsea. And we are better, too.

Back we came, Buckley’s direct running earned a corner and Rodwell thumped a header home from Larsson’s cross. Now there was a feeling that we could go on and win it and slip quietly into the Europa League places while ensuring that United fans were looking up the ground guides to Brentford, Bournemouth and Bolton.

But we didn’t. We just could not push on enough to win the game, which was a disappointment. The last time we beat them, the goals came from Michel Proctor and John Mullin as we tried in vain to stay in the Premier League. That was against a United side that won the league while we slipped back into the Championship. I suspect neither will happen this time.

Having said that, there was much to be quietly pleased about. Mannone, after an edgy start at the Hawthorns last week, looked far more confident, his highlight being the charge out of the box at Ashley Young. Miss the ball and he was off; he didn’t and won a great tackle against a so-called star player. The giant Pantilimon will have to wait a while for his league debut.

The back four was solid enough. Vergini settled in well and looks a very good footballer. His tackle on van Persie was excellent and he is so calm. Compared with the wholehearted but limited Phil Bardsley, we look to have a better balance across the four. All we need now is for van Aanholt to focus on his defensive duties more and we will have a tight and forbidding unit.

In midfield Lee Cattermole was outstanding, playing as Roy Keane did for United all those years ago. He tackled and passed, chased and harried and hardly gave a foul away. The responsibility that Poyet has given him sits well on his shoulders and he was ably supported by Rodwell and Larsson in that central area. We look good there and with Gomez and Bridcutt to fill in when legs get tired, the engine room of the team may well be more of a Mazda than the Moskvich it has resembled at times in the past.

The two wide men worked well. Wickham held the ball up with his back to goal and gave Smalling a difficult time, while Buckley looks interesting and gives us options we didn’t have before. Unfortunately, Fletcher had a quiet game and never really threatened the United goal. When Altidore burst onto the scene towards the end, he gave us a bit more energy up front.

The pace of a Borini type player was sorely missed. I would be surprised if he came now, but we do need someone like him to give us a more rounded approach. I suspect that had he or a fit Giaccherini been on the field Louis van Gaal would have been contemplating nil points from two games.

Nobody typified United’s decline more than Rooney and Young. For the former, we are witnessing the beginning of his decline. He is no longer feared and looked ordinary – a word that has rarely been used to describe him. For the latter, ordinary would be a compliment. Every centre he put in was straight at Mannone and was collected in the keeper’s midriff. Add to that his spectacular, Louis Smith type tumble in the box and he had a wretched afternoon. At least the avian population of Wearside kept away from him.

A win would have rounded off a good weekend. A pleasant night on Friday with old friends at the Stephen Wilson Memorial Day (five years since his life was taken by a drunken thug in Bishop Auckland) followed by a successful Wembley trip to watch my first love Leeds beat Castleford in the Rugby League Challenge Cup Final.

Stephen would have enjoyed Sunday and would have revelled in Cattermole’s performance and Buckley’s exciting wing play. He would have seen a brighter future for the club that he loved as much as do myself, M Salut and the readers of this site. Let’s hope that we can build on a decent start to the season.