Malcolm Dawson writes …….I watched this on the telly. Usually I shy away from talking about individual players’ performances when I haven’t been to the match because the small screen doesn’t allow you to see what is happening off the ball. Someone like Seb Larsson for example can frustrate the opposition by his positional play, blocking the route of an incisive pass or tracking the run of a player from deep. No such inhibitions on the first half at the Etihad as for most of that 45 minutes there were 10 Sunderland players in the picture, usually in two ranks, 18 and 24 yards in front of the goal line. Gus had set his stall and parked the bus and it appeared to be working but the tight marking and compact formation meant that when we did win possession there was no room for the player with the ball. On the odd occasion we did get into the City half we looked assured in possession but our attacks were by and large dealt with comfortably and City soon had us back defending deep. Those first half possession stats are frightening. That Yaya Toure should produce a wonder strike in the second half was not totally unexpected and this one was as good, if not better, than his effort at Wembley. Once behind we were forced to attack and looked a better side for it – at least on TV. Pete Sixsmith was there to witness things first hand. 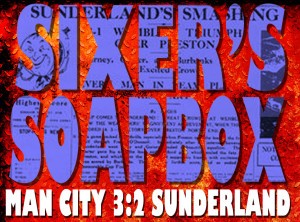 New Year’s Day dawned without a hangover, a far cry from those days in previous decades when the head would be thumping and the stomach would be churning after quaffing too much Strongarm and scoffing an excess of corned beef pie. Now, a respectable senior gentleman, it’s a night of Mapp and Lucia and a single whisky with the next door neighbours before I was tucked up in bed, disturbed only by fireworks being let off in the next street. Up at 6.00, a good breakfast and off to Thinford for the coach.

We arrived in Bury at 10.45 to find no buses, no trams and nothing open. The clientele in one of the Wetherspoons seemed more concerned with coffee and tea than ale, so I went for a walk and ended up outside Gigg Lane, a ground that provokes fond memories for Sunderland fans after we wrapped up promotion there fifteen years ago.

My first drink of 2015 on the station bar at The East Lancs Railway – a rather nice pint of Titanic Lifeboat – and then we sauntered down the M60 and the A57 to Eastlands, where I was frisked and asked to remove my cap in case I was smuggling something in. Like what? A bottle of vodka? Four cans of beer? A flare? Stewarding gone mad and there is always a large number of them at this stadium. I wonder if the home fans are treated in the same way.

Jack Rodwell made a rare appearance against his former club and Connor Wickham was given an equally rare opportunity up front as he returned to the scene of the game where his renaissance started last season. City looked a little short without Aguero but had Jovetic back as their lone striker.

For 45 minutes, the Beswick Billionaires huffed and puffed and barely threatened The Giant Pantilimon. The entire Sunderland team dropped deep when they had to and forced City to move the ball, sideways and backwards, but rarely forwards and when they did get into the box, Jovetic showed all the composure and quality of Danny Graham. O’Shea marshalled his back four, while Rodwell was quietly effective in front of them. Johnson and Larsson were busy and Wickham worked hard up front against two large central defenders.

The best save in the first half came from Willy Caballero (crazy name, crazy guy) who pushed an excellent free kick from Larsson around the post just before the break and we trooped off at half time looking comfortable as long as City remained so (relatively) ineffective.

They didn’t and showed their quality in the second half by coming at us and forcing us deeper and deeper. When the opening goal came, it was hardly a surprise. That it was scored by Yaya Toure was even less so. In the absence of Aguero and Dzeko, Yaya is the man they go to for a goal. He had lined up a couple of shots in the first half but had been thwarted by some excellent tackles, but this time, he was set up on the edge of the box and he produced a fantastic strike to give them the lead.

Poyet responded positively by sending on Giaccherini for Gomez but we went two down in the 66th minute when the ineffective Jovetic flicked the ball in from Clichy’s cross. Game over we thought as the City crowd woke from their New Year slumbers. On came Alvarez and back we came. Larsson’s excellent corner was headed in by Rodwell and then, when Billy Jones was fouled by Zabaleta in the box, up stepped Adam Johnson to convert the penalty. We were back in the game and thoughts of a spectacular win began to appear. Giaccherini and Alvarez had both played a part in the goals and their pace was causing City problems.

Enter Frank Lampard, a player I admire and a man I detest.  His header restored City’s lead before we could settle after the euphoria of the equaliser. It came from a good cross which Brown should have cut out and Lampard sent in a beautifully placed header to put them back in front. From that moment on, they never looked like losing. They stretched us and ran at us down the flanks. TGP made three excellent saves to stop them inflicting even more damage on our goal difference and they ran out deserved winners in the end.

The other results were not helpful and they left us a mere three points above the bottom three with Liverpool and Spurs to come before we meet Burnley in what could be a vital game for both teams.  Leicester are flickering back to life, Palace and West Brom have appointed new managers and Hull have managed to beat a team that is not Sunderland. Everton are a point better off than us and are on the edge of the battle while Villa can’t score.

And what about us? There were things to like on Thursday – a commitment to the cause and some good individual performances. I thought Rodwell looked good and that Johnson had a fine game. Hopefully theirs were not performances solely to show the City hierarchy how good they were and that both can maintain this level of performance throughout winter and spring. Giaccherini indicated that he might just give us that little bit extra behind a striker. He runs at defenders and gives us a different approach to the game which the likes of Buckley and Gomez do not. Both are increasingly looking like championship players – which is what they were up until August.

On Sunday, we have an opportunity to move forward in the FA Cup. Defeat to what looks like a relegation threatened Leeds United side is out of the question and I hope that as strong a team as possible is selected. Giaccherini, Alvarez and Rodwell all need to start and all need to show that they can play a major part in lifting us away from our seemingly never ending struggle with relegation.

The journey home was enlivened by excellent commentary by Connor McNamara and Steve Claridge on the goal fest at White Hart Lane amidst predictions as to how Mourinho would try to explain this one away. Maybe he should take a leaf out of Gus’s book and accept that he was beaten by a better side.