Malcolm Dawson writes….It is wet and windy in the North East of England as Sunday turns to Monday. But in a house of a red and white persuasion, it is cosy and warm, the Christmas lights are twinkling, schooners of sherry and glasses of mulled wine are being raised before a roaring log fire, whilst happy throngs of smiling people are singing carols, pulling crackers and setting off the party poppers. Meanwhile, gazing longingly through the windows at the joyous scene, stands a sad lonely figure, black and white fingerless mittens and a bah humbug black and white Santa hat the only protection from the cold. How he longs to experience the warmth and camaraderie of this, the festive season, but today the spirit of Derby present and that of Derbies past has brought home the despondency of his chosen path.


As the run up to Christmas gets shorter there may be some of you out there looking for Christmas presents for the younger members of the family. May I suggest that if that youngster is a Sunderland supporter (and if not, why not?) the game known as Connect 4 would be an excellent gift that will guarantee hours of fun and laughter for all the family. The object of this game is to place four consecutive discs in a line to beat and humiliate your opponent, who may be bigger and noisier than you and who may have a massively inflated opinion of themselves but who, if you manage to get four in a row, loses the game and probably stomps off in a fit of pique.

I should point out that this gift is not suitable for those of a black and white persuasion. Give them a Frozen doll instead – that’s what they do when they play us.

This was a most welcome start to the Christmas festivities and a present that was as welcome as the red and white scarf I was given on Christmas Day 1964, a mere fifty years ago. I may have mentioned that this is my fiftieth year watching Sunderland, so new readers, start here. That we won it in the last minute made it double fun for the 2,700 of us tucked away above the car parks and towers of Newcastle city centre, way above the play and with a fine view of the North East’s third best bridge.

The trip through had been uneventful as the police escort took us along the Felling by pass and into the city across the Tyne Bridge before parking single file on Barrack Road. The police presence was distinctly less obtrusive than in the past and the drinkers at The Star Wars Bar (aka The Black Bull) were discouraged from engaging in conversation with us. Once in the ground, we were able to see the screen that nearly fell down and put up with the PA man, who seems a meek soul until 5 minutes before kick-off, when he transforms himself into a screaming banshee with the words “Toon, Toon.” Not a great deal of class in that.

And so the game began. Reveillere had picked up an injury in the warm up so Coates came in for him and Fletcher replaced Altidore. Not unnaturally, the twin tactical geniuses of Pardew and Carver had made it clear that the Uruguayan was to be attacked and this they did, utilising the pace of Perez and the strength of Sissoko. The Liverpool loanee was booked after eight minutes, but once he settled down, he played well and looked very comfortable on the ball.

If Coates deserved a yellow card, Argentinian Fabricio Coloccini should have had a red for his attack on Steven Fletcher. I haven’t seen a replay but from where I was (admittedly, somewhere near the moon) it looked like a deliberate attempt to kick him in the back. Anthony Taylor had a think and pulled out a yellow and Coloccini stayed on. Mr Taylor then allowed Check Tiote to commit five fouls before he eventually booked him; each one of those five was worthy of a yellow card. Tiote had done his destroyer bit and did not commit another foul for the rest of the time he was on the pitch.


In between all of this, there was some decent football from both teams. Fletcher latched on to a wonderful ball by the ever so impressive Seb Larsson and chipped a hesitant Jak Alnwick. Alas, the ball hit the bar and bounced over. Ten minutes later, Connor Wickham should have scored with a header from an excellent Vergini cross, but it was too close to the former Sunderland keeper and he saved it.

Goalless at half time, it continued at a merry pace and neutrals in the crowd (ha, ha, ha) would have enjoyed an open game between two decent sides who both played football. Sunderland were the more experienced and they defended well; Newcastle had the impetuousness of youth and always looked susceptible to a breakaway. Chances were missed by both sides; Jordi Gomez should have scored after a move that ripped a shaky Newcastle apart, but he put it wide and Adam Johnson did something similar.

At the other end, The Giant Pantilimon made a number of steady saves and one very good one, without needing to be spectacular, as Newcastle used the flanks well but found Brown and Vergini in “they shall not pass” mode in the centre.

Pardew, desperate to rack up his first win over us at The Sports Direct, took off the admittedly tiring Tiote and sent on Cisse, a player who was clearly not fit. He had already replaced the ineffectual Gouffran with Armstrong a 17 year old who had been sent back to the SD by Hartlepool and who was clearly not destined to be the latest “Jawdie Hero”.

Meanwhile, Gus Poyet was getting his subs right. Off came Cattermole to be replaced by Liam Bridcutt and then, in the game changer, Connor Wickham was replaced by Will Buckley. It was going to be Adam Johnson but Gus thought there might just be something in him. How right he was. 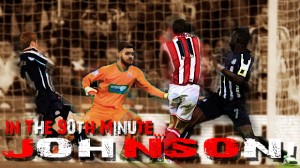 Fletcher and TG Pantilimon came in for praise for excellent performances as did Brown and O’Shea. Coates overcame his shaky start to look a good player and Cattermole did what Cattermole does. For me, Seb Larsson was outstanding – every time you looked for the ball, he was there and he tackled and passed with care and accuracy. He certainly looked better than a disappointing Jack Colback, who could have received two yellows in the first half.

It was a good win and an important one. The three points lift us to the top of the relegation group and knocking on the door of the mid table franchise. A win over Hull City on Friday would put us there and give us another boost – although they beat us twice last season after we had beaten the Mags. Let that be a warning.

The game was played in the usual intense atmosphere, but the round of applause in the 17th minute allowed Sunderland supporters to show their respect for John Alder and Liam Sweeney and I thought that the applause in the 33rd minute to say thank you for the £33,000 raised by our support was a touch of genuine class. Thank you, Newcastle fans. Even Pardew was open and honest after the game. This must stop; we want more moaning and looking for excuses, Alan. Don’t let us down in April.


No police horses were punched, most of the city was quiet and we went home on the bus smiling from ear to ear. Lewis Carroll’s Cheshire Cat had nothing on us as we travelled down the motorway and home to our teas.

A grand day out and if you are travelling on Coaches A and B of The Polar Express over the next two days, keep an eye out for a permanently smiling Santa Claus.

You can read M Salut’s ESPN piece by following this link.

6 thoughts on “Sixer’s Newcastle Soapbox: God bless us every one (nil)!”